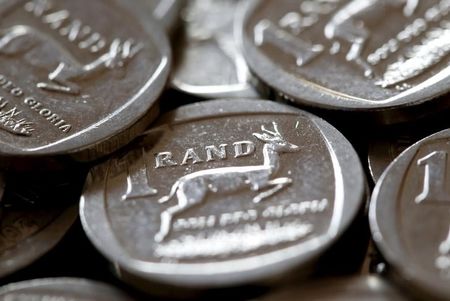 GLOBAL MARKETS Asian stocks advanced on Friday as a report of progress in U.S.-China trade talks stirred hopes of a deal in their tariff dispute and supported risk sentiment. MKTS/GLOB

EMERGING MARKETS For the top emerging markets news, double click on STOCKS For the latest news on African stocks, click on .J

SOUTH AFRICA MARKETS South Africa's rand fell against the dollar on Thursday after the central bank left interest rates unchanged and sounded less hawkish, citing an improved inflation outlook. OIL Nigeria's state oil company on Thursday raised the February official selling price (OSP) for Bonny Light BON-E and Qua Iboe crude oil QUA-E to dated Brent plus 119 cents and 122 cents per barrel, respectively. SECURITY Islamist insurgency Boko Haram has claimed it carried out Monday's attack on the northeast Nigerian town of Rann, according to a video released on Thursday by Nigerian journalist Ahmad Salkida. FORTE OIL Nigerian energy firm Forte Oil FO.LG plans to enter into talks to sell its power unit to its major investor, billionaire Femi Otedola, after it failed to secure a deal via a public tender. SECURITY Nineteen people still missing two days after a Somali militant attack on a Nairobi hotel and office complex that killed 21 people are now accounted for, the Kenyan Red Cross said on Thursday. MARKETS The Kenyan shilling KES= was firm against the dollar supported by inflows from diaspora remittances and tightening liquidity in the money market subduing merchant and oil importer demand, traders said. SAFARICOM Kenya's biggest telecoms operator, Safaricom SCOM.NR , notched up one million users for its new overdraft feature on the M-Pesa platform in just eight days, surpassing its CEO's expectations, he said on Thursday. MARKETS The Uganda shilling UGX= was a touch weaker on Thursday on the back of a pick-up in demand by players in the interbank market. JOURNALIST Gunmen in Ghana killed an investigative journalist who had helped uncover corruption in football, rights groups and his employer said on Thursday. CURRENCIES The Kenyan shilling and the Nigerian naira are expected to remain stable in the next week, while the Ugandan shilling is likely to weaken. POLITICS Zimbabwean activist pastor Evan Mawarire was charged in court on Thursday with subverting the government, punishable by up to 20 years in jail, after violent protests this week that were met by a brutal crackdown from security forces. INFLATION Zimbabwe's inflation hit a fresh 10-year high of 42.09 percent year-on-year in December, from 31.01 percent in November, driven by increases in the price of basic goods, the statistical agency Zimstats said on Thursday. ELECTION The African Union on Thursday called on Democratic Republic of Congo to suspend the release of the final results of its disputed presidential election due to its doubts over the provisional results. FASO KIDNAPPING A Canadian kidnapped this week in a restive region of Burkina Faso has been found dead, a spokesman for the security ministry said on Thursday, drawing condemnation from the foreign ministers of Canada and Burkina Faso. COAST TAX Ivory Coast collected 2.15 trillion CFA francs ($3.76 billion) in 2018, up from 1.96 trillion CFA francs in the previous year, tax chief Abou Sie Ouattara told reporters on Thursday. the latest precious metals report click on GOL/

For the latest base metals report click on MET/L

For the latest crude oil report click on O/L