LONDON/BEIRUT (Reuters) - Lebanon's new government faces huge upcoming debt repayments and a currency peg at breaking point, but it may already have run out of the hard cash firepower it needs to tackle these problems.

The heavily indebted country faces hefty bond repayments coming up in March and April, when $1.34 billion and $842 million of interest and principal respectively come due.

Analysts expect the central bank to be able to foot the bill, for now, though some in Beirut believe a rescheduling or restructuring is preferable.

But as policymakers cling to the currency peg and with dollar flows having dried up, the question of how much ammunition the central bank has left has become ever more pertinent.

Some analysts calculate that the country's foreign currency reserves could be negative in real terms.

"In a crisis, there's no definition of what's usable," said Nafez Zouk at Oxford Economics. "If you have to defend the peg, what's usable and what's not usable changes, and you will have to touch the reserves held by banks at the central bank."

Officially, the country had foreign currency reserves of $31.5 billion at the end of December. The International Monetary Fund calculated that Lebanon had more than 11 months' worth of import cover - a level deemed ample by many measures.

But how large is the war chest in reality? Morgan Stanley (NYSE:MS) calculates the current level of net reserves - or gross foreign currency holdings minus banks' mandatory reserves together with the country's own holdings - at $11.5 billion as of the end of 2019.

"Estimates of BDL's (Banque du Liban) usable reserves were wide-ranging, given the complex linkage between BDL and the domestic banks," Morgan Stanley strategist Jaiparan S Khurana wrote in a recent note to clients. Khurana also acknowledged that some calculations of reserves could end up with a negative number.

The fact that the central bank owes $67 billion to commercial banks would also turn the reserves number negative, said Oxford Economic's Zouk. And even some policymakers agree.

"In my opinion the reserve has become negative," outgoing economy minister Mansour Bteish said in an interview.

Bteish estimates the shortfall between the central bank's liabilities to commercial banks - or hard currency deposits parked by lenders at the bank - and its own reserves at around $40 billion.

While selling large quantities of gold is not that easy, countries under pressure such as Venezuela have mobilized their gold stacks as collateral for swap operations to gain access to hard currency.

Yet Zouk points out that Lebanon using its gold could be tricky as parliamentary approval is needed to do so and domestic public opinion is strongly against such a move.

And while it is unusual for a country's central bank and lenders to hold the foreign-denominated debt of their own sovereign, this could be a mitigating factor in the big debt repayments falling due soon, some analysts said.

Lebanon faces interest and principal payments of nearly $4.4 billion in all in 2020.

"Considering the foreign ownership is now 45%, the net impact on the BDL's foreign reserve position from these payments will be smaller than what the headline number would suggest," Morgan Stanley's Khurana said.

While official data show that foreign currency reserves have held up better than many expected in recent months, trends in dollar flows - the grease that has kept Lebanon's financial engine running for years - are a cause for concern, said J.P.Morgan.

Beirut appears to be running out of road fast, said Oxford Economics' Zouk. He calculates that Beirut will honor its upcoming debt payments while leaving capital controls in place but that it will lack new dollar inflows while having to manage a current account deficit including a 30% compression of imports and additional foreign currency leakage of $2 billion a month. 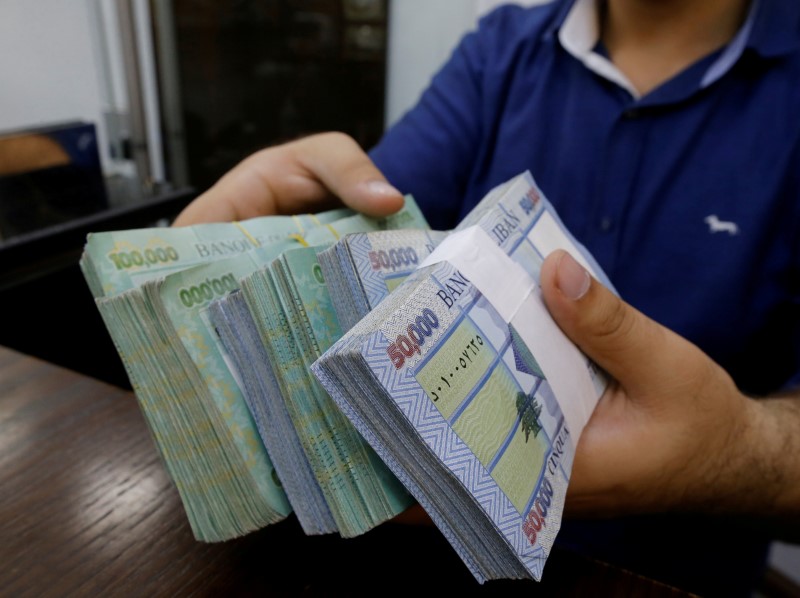 "Add all these up, and reserves are gone by September."