Will FOMC Be Good Or Bad For The U.S. Dollar?

Will FOMC Be Good Or Bad For The U.S. Dollar?

Wednesday’s Federal Reserve monetary policy announcement is the most important event risk on this week’s calendar, but many investors are wondering how much impact it will have on the U.S. dollar. On Monday, the greenback traded lower against all of the major currencies on the expectation of dovishness, but today, the price action is mixed. The dollar extended its slide against the Japanese Yen but strengthened versus the euro. Other currencies, like sterling, the Canadian, Australian and New Zealand dollars, ended the day up versus the greenback but also descended from earlier highs, which means that during the New York session with the exception of USD/JPY, the dollar caught a bid.

Why are investors buying dollars? With stocks rising for the third day in a row, it's not because of risk aversion. Treasury yields are up slightly, which helped, but one of the main reasons is the sharp rise in the Empire State manufacturing index. Economists were looking for the index to rise to 6.9 from 3.7, but it leaped to 17. New York state’s low infection rate and continued reopening helped the manufacturing sector recover at its second fastest pace since 2018. While some states reported spikes in virus cases over the past month, it has not led to tighter lockdown measures, which means that the recovery continued.

When the Federal Reserve meets tomorrow, no changes in monetary policy are expected. The main focus will be its economic projections and dot-plot forecast. We know that the language in the FOMC statement will adjusted to account for the central bank’s new inflation strategy. In August, Chairman Jerome Powell announced a new framework that would allow inflation to overshoot the central bank's targets in order to attain long-term price stability. This new approach follows nearly a decade of inflation falling short of the 2% target. Its economic projections and dot plot could reflect these changes with lowered expectations for price growth and delayed tightening. However, the Fed may raise its growth outlook, which could be enough to drive the dollar higher because going into the rate decision, investors are positioned for dovishness.

Since its last policy meeting in late July, consumer spending softened, confidence declined and job growth slowed. However, there were improvements in the housing market and, according to the ISM surveys, manufacturing activity accelerated at a faster pace, while services stabilized. In fact, when Powell announced the Fed's new inflation strategy, the dollar soared instead of weakened for this very reason. Powell’s comments at the time also contained a tinge of optimism as he described the economy as healthy, apart from virus-hit areas. So we would not be surprised if the dollar gained strength on FOMC, but it won't be a smooth ride. Reductions in rate-hike expectations via the dot plot could drive the dollar initially, but it could end the day higher. U.S. retail sales will be released before the monetary policy announcement and could set expectations for the rate decision. 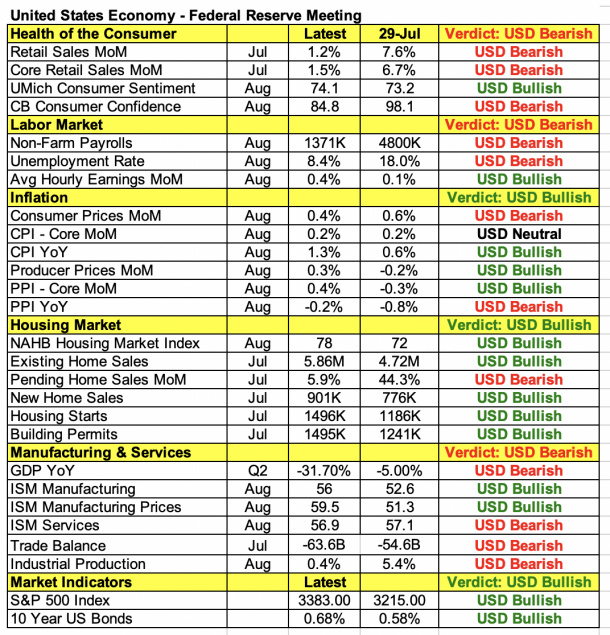 The strongest currencies today were the New Zealand dollar, Japanese Yen and Australian dollar. NZD rallied as relaxed lockdown restrictions eased and dairy prices ticked higher, while AUD perked up after the RBA minutes and on stronger Chinese data. UK and Canadian CPI reports are scheduled for release on Wednesday. According to the PMIs, inflationary pressures in the UK accelerated, while prices in Canada softened. With a Bank of England rate decision on this week’s calendar, UK data could have more impact on GBP than CAD data on the loonie.