Looking at Tesla's (NASDAQ:TSLA) share price and enthusiasm about its future growth, it’s clear that investors don’t believe that anything can go wrong with this electric carmaker. That belief could be tested today when the company announces its third-quarter earnings report after the closing bell.

As we get set to dive into the earnings figures, there are strong signs that Tesla’s CEO, Elon Musk, is in an enviable position to deliver on some of his promises. The company told investors earlier this month that its vehicle deliveries hit a new record in the most recent quarter as demand remains strong even during the pandemic.

Tesla sold 139,300 vehicles in the September quarter, slightly ahead of the 137,000 deliveries analysts were expecting and 44% above the prior-year figure. In the first nine months of 2020, Tesla has delivered slightly more than 318,000 vehicles, bringing it closer to making good on its target to deliver 500,000 vehicles in 2020, an increase of at least 36% from last year’s total.

These positive developments sent Tesla shares soaring more than 400% this year, making it the most valuable car company in the world with a market cap of $400 billion. The shares closed at $421.94 on Tuesday, down 2.06% on the day. 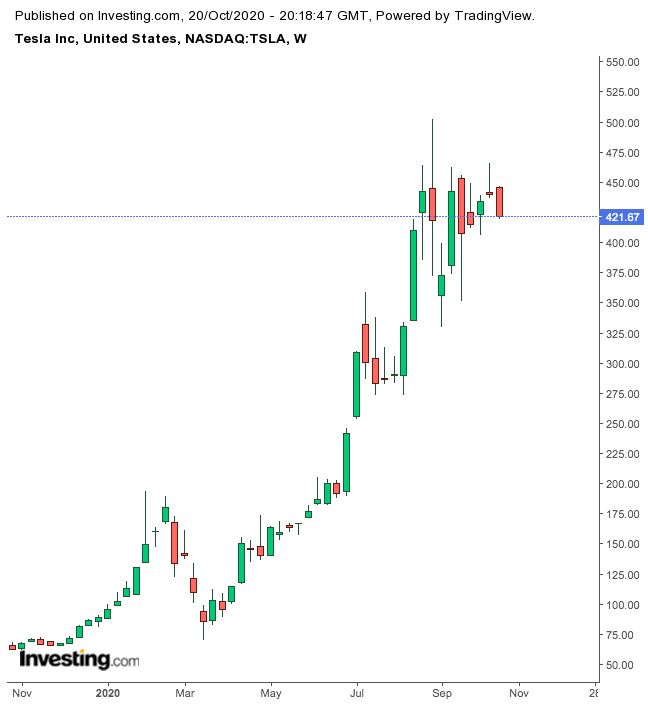 But the reality of investing in Tesla stock is that it can fall as quickly as it goes up. In a correction that started in early September, Tesla lost more than 30% of its value in just one week. Though the stock has recovered some of its lost ground since then, it’s still down 14% from its record high.

For these reasons, it’s very important for Musk to keep Tesla profitable to show that he can consistently sell cars more than they cost. Analysts, on average, expect the company to post a 31% surge in sales to $8.26 billion. But per-share profit may decline to $0.55 from $1.86 from the same period a year ago.

Wedbush analyst Daniel Ives raised his price target ahead of Tesla earnings to $500 from $475, saying it is in a good position to sell more cars:

“Tesla's improved manufacturing efficiency, and shining Giga 3 success in China will be on full display later this week and lead to another strong bottom-line performance, which should beat the Street in our opinion."

To keep momentum going, Musk recently outlined his future strategy at the company’s Battery Day event that includes producing a lower-cost battery, building a $25,000 electric car and eventually producing 20 million vehicles a year. These ambitious targets, however, came without a precise timeline or budget.

Tesla’s profits in Q2 didn’t come from selling more cars, however. Total revenue actually fell 4% from a year earlier, but they included $428 million of regulatory credit sales to help rival manufacturers meet emissions mandates. These credit sales are pure profit and accounted for more than 100% of the company’s operating income. A year ago, Tesla booked $111 million in second-quarter credit sales.

Despite investors optimism, we feel Tesla’s recent achievements are already factored into the stock valuations and its shares are substantially overvalued relative to the fundamentals.

With a lack of upcoming catalysts insight, we are cautious about demand given the recessionary environment and accelerating pace of coronavirus infections. These circumstances will likely make it tough for the company to hit its 500,000 car sales target for the year. After a breathtaking rally this year, in our view, Tesla shares will remain susceptible to downward pressure, and it would be prudent for investors to take some risk off the table and enjoy the gains.