This morning, US futures for the Dow Jones, S&P 500, NASDAQ and Russell 2000 were mixed, and European shares fluctuated as August trade kicked off on Monday. Though the month of July saw another rally for equities, concerns left over from the past month will continue to roil markets as the new month begins.

US lawmakers remain gridlocked regarding the resolution of a new stimulus plan as another COVID-19 spike hit new milestones, and Sino-US diplomatic tensions continue.

The dollar climbed along with yields. Gold pared an advance. Bitcoin found its footing, and oil fell back below $40.

US futures fluctuated as global coronavirus cases topped 18 million and fatalities soared to over 1,000 deaths on 11 of the last 31 days in the US alone. The number of deaths there is nearing 160,000 and the Center for Disease Control predicts up to 11,000 people will die every week this month.

According to Deborah Brix, the White House's Coronavirus Response Coordinator, the disease has entered a “new phase.”  She warns that the virus is now “extraordinarily widespread” in the US, and is taking hold over large parts of the country.

On the US-China front, it's anticipated Washington will announce new measures against “a broad array” of Chinese software it considers a national security risk, according to US Secretary of State Michael Pompeo.

At the time of writing, NASDAQ futures are outperforming, (+0.5%), having remained in the green thus far for the entire session. In contrast, contracts on the Russell 2000 started in the red and have continued along that trajectory, (-0.15%). Futures for the S&P 500 and Dow have been whipsawing between gains and losses.

The Stoxx Europe 600 Index rebounded from an initial downturn, as HSBC (LON:HSBA) missed profit estimates and Société Générale (PA:SOGN), hit by the pandemic, acted as a drag on the pan-European index. 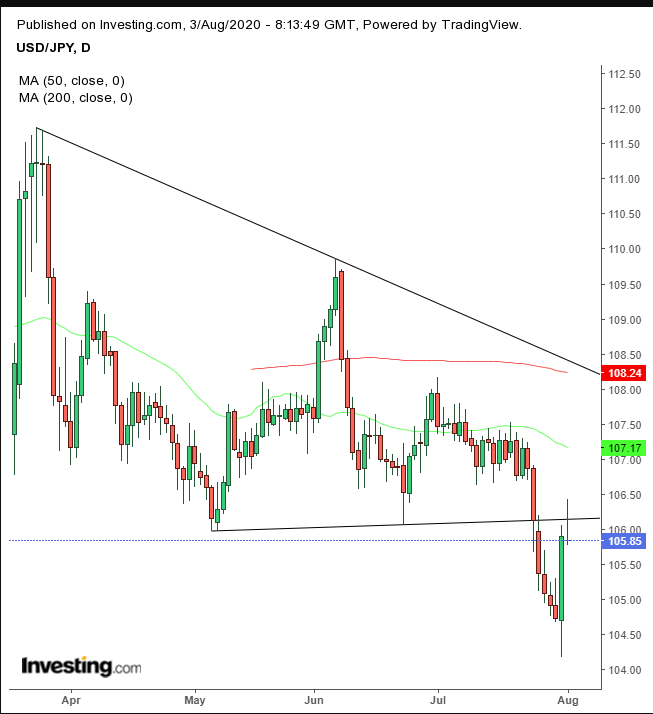 The dollar retreated from the bottom of a descending triangle, developing a shooting star, bearish, subject to a close.

Yields, including for the 10-year benchmark Treasury, trimmed an advance. 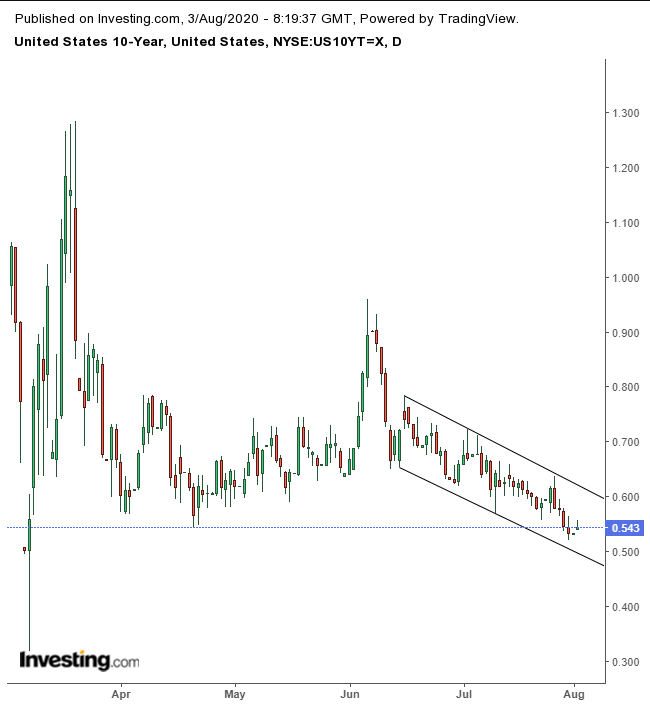 Though rates are still near record lows, the chart clearly demonstrates there's ongoing demand for Treasuries even with yields at April 21 lows. Yields are currently trading in a falling channel pointing at the March 2, 0.5% record low close.

A squeeze on crowded short positions left the dollar clinging to a tentative bounce, which quickly dissipated. 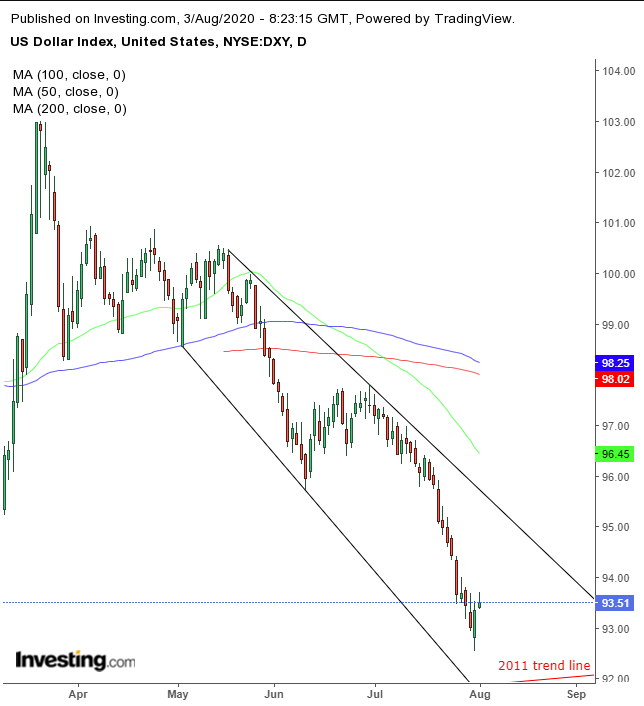 USD forces are starting to conflict. The building disparity is between a short-term falling channel since the May highs and an uptrend line since 2011, seen in the bottom of the chart.

Gold has completed an hourly rising wedge within a rising channel, after already having completed an ascending triangle. 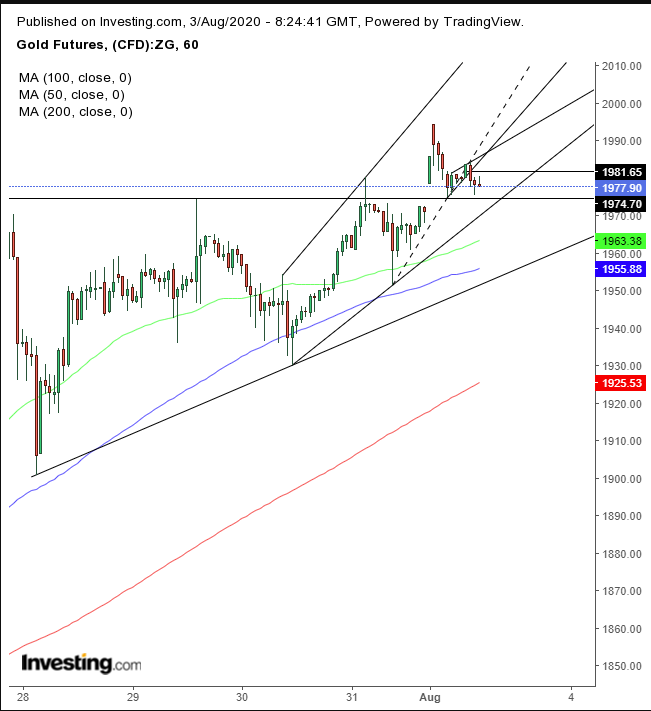 The latter pattern’s integrity may determine whether a pullback is in the works.

Bitcoin is once again on the move. 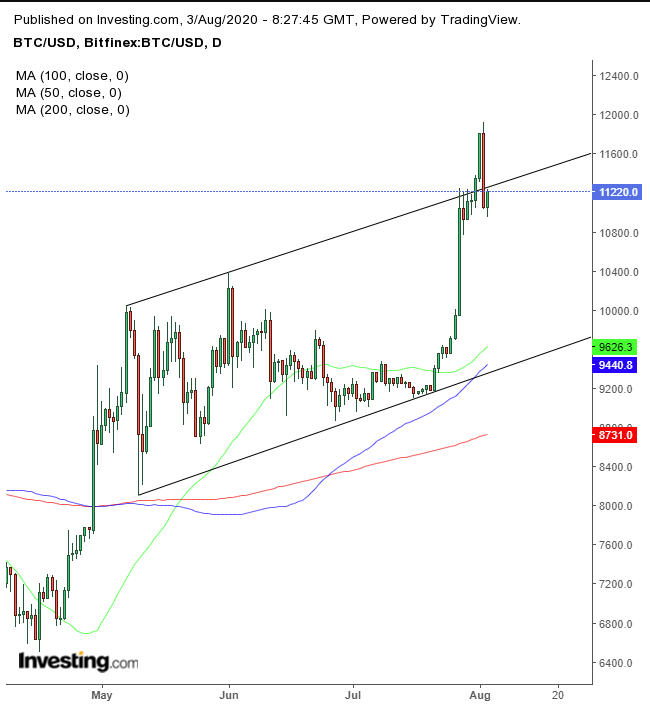 A break of the $12,000 level would suggest a spike in the uptrend, while the price’s inability to return above the channel will suggest a more moderate upturn. Either way, the trend is expected to continue higher, but that doesn’t mean there can’t be a corrective dip toward $10,000 first.

Oil is below $40 once again, for the second time since Thursday, after having remained above that threshold for 14 straight sessions. 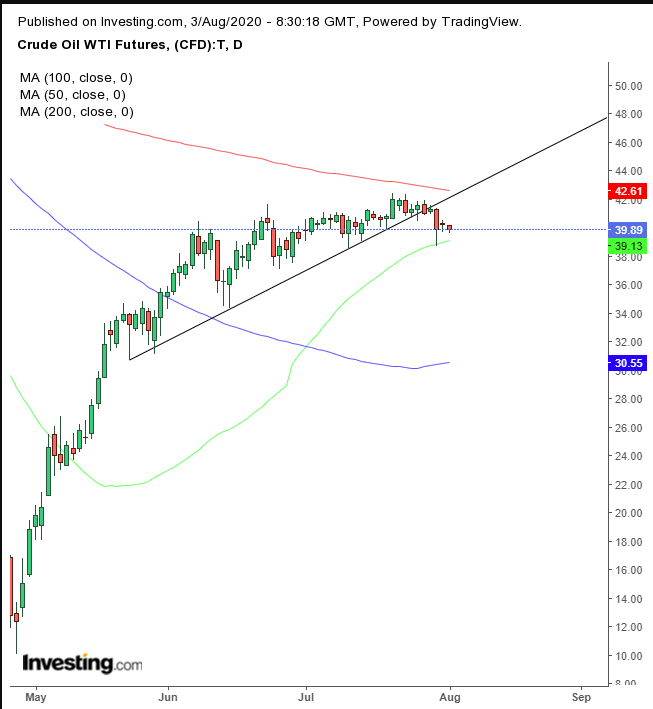 After WTI fell below its uptrend line since May 21, it found footing above the 50 DMA. Given it had fallen below the uptrend line, and the 200 DMA is adding weight from above, it’s more likely to see further declines.