Chart Of The Day: Chinese Yuan At Important Support; Where Will It Go Next?

Chart Of The Day: Chinese Yuan At Important Support; Where Will It Go Next?

It’s the moment of truth for the yuan. Will it resume its rally since Sept. 3, the bottom for the Chinese currency? Or, will it return to its overall decline since the 2014 peak?

The yuan seems to have ended 2019 almost at the same level as where it began. The currency’s drop of 1.3% versus the dollar would be its smallest move on a yearly basis in seven years.

A Bloomberg survey predicts the yuan will finish 2020 slightly lower, at 7.1. We actually expect the yuan to weaken much more than that, and sooner. In our view, the renminbi’s current rise is just temporary. However, the USD/CNY pair is currently testing an important support, which, if breaks, it could be the start of a reversal.

Though the stimulus move by the PBoC, China's central bank, caused the yuan to ease, trade remains the giant overarching wildcard for the dollar-yuan. The pair, which moved past the 7 crucial level in August, for the first time since the 2008 crash, fueled by the tariff spat between the U.S. and China. During the last quarter, on the prospect of a phase 1 deal, it climbed 2.6%. If trade hits another iceburg the yuan’s fall could occur sooner and be harder.

As well, technicals are looking negative for the yuan: the USD/CNY is currently testing an important support, which, if it breaks could be the start of a reversal. 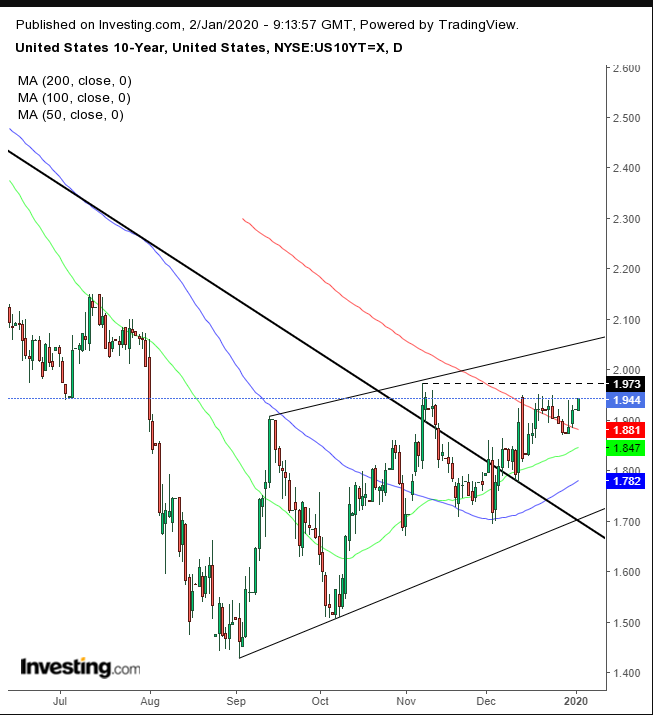 The pair has been trading within a falling wedge since August. It's bullish, since it is developing within a rising channel since the March 2018 bottom.

The 200 DMA traces that bottom, revealing it to be a significant support area. The pattern’s development—where the price is right now—is at that very bottom, further demonstrating its pressure point on the supply-demand map.

An upside breakout—and Bloomberg’s median target of 7.1 is exactly that—will show that all available supply has been absorbed and eager buyers are upping their bids, paving the way for an extended uptrend, to challenge the 7.22 highs reached in early September.

However, if the price falls below the 200 DMA, and it’s already below the channel bottom, even after the recent easing, and continues to decline below the pattern bottom, we might be looking at a reversal.

Conservative traders should wait for the completion of the falling wedge, with the upside breakout, at least a 3% filter, to avoid a bull trap and a return move that demonstrates support.

Moderate traders may risk a long position if the price closes back above the uptrend line/bottom of the rising channel.

Aggressive traders may take advantage of the lowest price since November 2018 and the close proximity to the 200 DMA, affording a cheap stop-loss, and go long now, providing they have a plan and understand the risks.