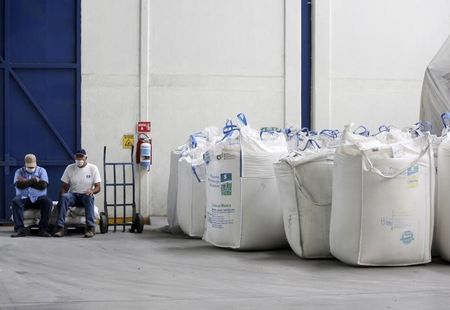 * Sold stakes in joint ventures to Italy's ETEA, bought one

PARIS, June 12 (Reuters) - France's largest sugar maker Tereos was confident about next year's results because of a rebound in prices in Europe, after reporting a tenfold increase in net losses for 2018-2019 on Wednesday.

World sugar prices dropped to their lowest in a decade last year due to a surge in supplies, partly driven by the scrapping of output quotas from the European Union in 2017. The global market has since stabilised SBc1 and European prices have recovered.

"We should fully benefit from the recovery in prices in the second half of the year," Chief Executive Alexis Duval told Reuters, adding that spot sugar prices in Europe had climbed 33% since the end of its past financial year.

Tereos' annual net loss widened to 242 million euros ($274.3 million) in its financial year to the end of March from a 23 million euro loss the previous year.

Many European sugar makers, including Germany's Suedzucker SZUG.DE , the EU's largest sugar largest refiner, unlisted Nordzucker and French peer Cristal Union also posted sharp drops in profits last year as prices in an oversupplied market plunged. led to some manufacturers planning factory closures. Suedzucker and Cristal Union both plan to stop output at two sugar factories in France in 2020. Tereos reiterated it had no such plans. expected Tereos' EBITDA to remain positive in 2019-2020 but declined to give guidance for net profit.

An agreement with Italian group ETEA covering alcohol and starch assets in Europe was expected to further boost Tereos' non-sugar activities that have cushioned the impact of the sugar market crisis, he said.

Tereos said in its results statement it would buy ETEA's 50% stake in Sedalcol France and sell to ETEA its 50% interest in Sedamyl and Sedalcol UK.

The deal, expected to be completed this summer, would reduce Tereos' net debt by 220 million euros and have a positive impact on operating profit of around 15 million euros a year, Duval said.

He declined to say whether any other disposals were likely for the cooperative group.

That included falls of 142 million euros at both its European and International sugar activities that include its Brazilian branch.

Net debt rose to 2.50 billion euros from 2.35 billion at the end of March last year, mainly due to a negative cash flow and an unfavorable exchange rate impact, the company said.

The group said in February it had secured a 250 million euros loan expiring in 2022, and would repay half of its 500 million euros March 2020 bond FR0011439900= a year in advance. struggled, however, to find financing in April when it sought additional banks to spread the loan's risk, sources had told Reuters. Chief Financial Officer Stephanie Billet declined to say whether the process had proved successful.

"We have a very solid and satisfying liquidity situation and financial structure," Billet told Reuters.

She said the group had a credit line secured with some large banks that could ensure the repayment of the other half of the bond next year but would try to obtain financing from others ahead of time.

Tereos delayed until 2019/20 part of its guaranteed price for sugar beet, easing the burden for the 2018/19 season by nearly 110 million euros. group's poor results in the past two years have prompted an internal crisis, with dissidents accusing Tereos of hiding financial difficulties, something the group has always denied. ($1 = 0.8822 euros)