UPDATE 1-UK Stocks-Factors to watch on May 15

UPDATE 1-UK Stocks-Factors to watch on May 15 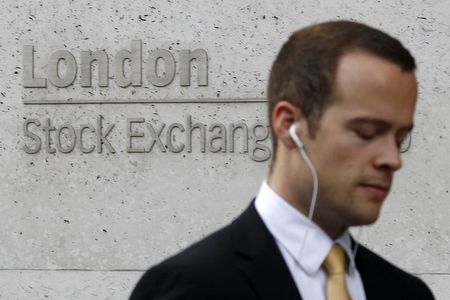 May 15 (Reuters) - Britain's FTSE 100 .FTSE index is seen opening up 12 points at 7,447 on Monday, according to financial bookmakers, with futures FFIc1 up 0.28 percent ahead of the cash market open.

* NEX GROUP: UK-based financial broker NEX Group NXGN.L reported higher profit for the year to March, but said that trading activity since the start of the year had remained subdued due to low volatility. LONMIN: South Africa-focused platinum producer Lonmin LMI.L , LONJ.J on Monday reported a first-half operating loss of $181 million hit by higher costs and lower production. SNC/ATKINS: SNC-Lavalin SNC.TO will not raise its offer for British engineering and construction firm WS Atkins ATKW.L unless it faces a rival bid for the British firm, the Canadian construction and engineering group said on Monday. BHP: One of the last reminders of a merger 16 years ago that created the world's biggest mining house will be erased on Monday when BHP Billiton BHP.AX , BLT.L changes its name back to just BHP. BHP Billiton BHP.AX , BLT.L Chief Executive Andrew Mackenzie, batting off an attack by activist funds, will tell investors in Barcelona next week that the top global miner can pump more for less out of its unloved shale assets. VODACOM/VODAFONE: South African telecoms operator Vodacom VODJ.J said on Monday it will buy a 34.94 percent stake in Kenya's Safaricom SCOM.NR from Vodafone VOD.L for 34.6 billion rand ($2.59 billion). LV= : British insurer Liverpool Victoria Friendly Society Ltd (LV=) said on Friday it had received approaches from several possible buyers about a deal involving its general insurance division. BP: BP Plc BP.L has sued a former U.S. oil analyst for allegedly stealing trade secrets and other confidential information, according to court filings. MONDI: Mondi Group MNDI.L MNDJ.J denied on Friday that its new Chief Executive Peter Oswald was planning to restructure the packaging and paper company but confirmed it would move some of its Johannesburg functions to its Vienna office. SKY/FOX: 21st Century Fox Inc FOXA.O is trying to seek government approval for its Sky Plc (LON:SKYB) deal and is prepared to make concessions to U.K. regulators Bloomberg reported citing people familiar with the matter. CYBER ATTACK: Production at Nissan's 7201.T manufacturing plant in Sunderland, northeast England, has been affected by a cyber attack that has hit nearly 100 countries, a spokesman for the Japanese carmaker said on Saturday. Britain is spending around 50 million pounds ($64 million) on improving the security of the National Health Service's computer systems and had warned the NHS it faced cyber threats, defence minister Michael Fallon said on Sunday. The UK blue chip index finished the week 0.5 percent higher at 7,435.39 points, a record close, as pharmaceutical stock AstraZeneca AZN.L rose on a positive drug trial and broker upgrades buoyed individual firms. For more on the factors affecting European stocks, please click on: cpurl://apps.cp./cms/?pageId=livemarkets