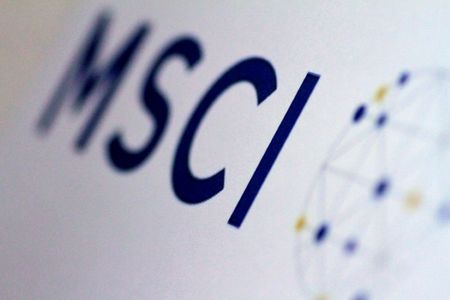 * Investors expect U.S., China to negotiate after all

LONDON, April 5 (Reuters) - World stocks edged higher on Thursday as investors responded to signs of an easing of Sino-U.S. trade tensions by dipping back into riskier assets.

The dollar .DXY also drew support, hitting a two-week high of 90.34 against a basket of major currencies and rising against the safe-haven yen to 107.03 yen JPY= .

Proposed 25 percent U.S. tariffs on some 1,300 industrial technology, transport and medical products from China will be subject to a public comment and consultation period that is expected to last around two months.

"I think that the substance of trade restrictions and their real impact will be far less than the headlines," said Jeffery Becker, Chairman and CEO at Jennison Associates in New York.

Asian stocks also benefited, with MSCI's broadest index of Asia-Pacific shares outside Japan .MIAPJ0000PUS up 0.6 percent, a day after it hit its lowest in almost two months.

Many suspect Washington will likely back down on some fronts after Beijing threatened tariffs on soybeans, the top U.S. agricultural export to China.

That is considered one of the most powerful weapons in Beijing's trade arsenal given the potential impact on Iowa and other farming states that backed Donald Trump in the presidential election. soybeans Sc1 and corn Cc1 regained ground on Thursday, following losses of around 2 percent the previous day.

Some observers argue that the global economy is currently running so well that it could cope with the impact of the proposed tariffs, which cover a fraction of world trade.

"We've had a few months now where markets have really been going sideways and progressively lower, but at the same time has data really rolled over? The answer is no," Geoffrey Yu, head of the UK investment office at UBS Wealth Management, said.

"The underlying economy is actually chugging along which will increase the scope for upside surprises on the corporate front, on the economic front and at some point markets will have to catch up to that."

U.S. data on Wednesday underscored the prevailing bullish view on the economy. Private payrolls increased solidly in March as hiring rose across the board, boding well for Friday's jobs data. correction since January has driven share price valuations down from record levels, attracting bargain hunters.

MSCI ACWI .MIWD00000PUS traded at 14.77 times its forward earnings, the lowest in more than two years.

Oil prices bounced back in tandem with global share prices, and on a surprise draw in U.S. crude stockpiles. U.S. crude futures CLc1 traded at $63.38 per barrel, flat in percentage terms.

Bond markets were hit by the recovery in equities as demand for safe-haven assets ebbed. The yield on the German 10-year DE10YT=RR touched a one-week high of 0.538 percent, while U.S. treasury yields US10YT=RR were at 2.827 percent.