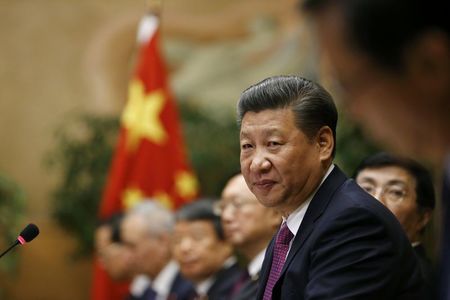 * Stocks up as Xi seen conciliatory on trade

Speaking at the Boao Forum for Asia in China's Hainan province, Xi vowed to open China's economy further, protect intellectual property of foreign firms and he criticized a "Cold War mentality" as obsolete, in his first public comments since the trade dispute with U.S. President Donald Trump's administration erupted. comments prompted a largely positive reaction in financial markets, which have been rattled on fears that tit-for-tat U.S.-China tariffs will escalate into a full-scale trade war that would threaten global growth.

"The expectation was this could have gone one of two ways: he could have been aggressive about U.S. tariffs or been conciliatory, and it feels like he's more conciliatory," said Art Hogan, chief market strategist at Wunderlich Securities in New York.

Emerging market stocks rose 0.93 percent. MSCI's broadest index of Asia-Pacific shares outside Japan .MIAPJ0000PUS closed 1.17 percent higher, while Japan's Nikkei .N225 rose 0.54 percent. markets rose sharply on hopes that the trade dispute may be resolved without greater damage to the global economy. not so much 'risk on/risk off', as it is 'trade war on/trade war off' and, at the moment, we're 'trade-war off'," London Capital Group's Jasper Lawler said.

"There's a lot of political motivation in the tariffs in the United States, but ultimately, they won't want a trade war, there is a general desire to boost the U.S. economy."

Xi's comments also lifted the U.S. dollar against the Japanese yen. main driver was the speech by China's President overnight that helped to calm some concerns about a looming trade war," said Omer Esiner, chief market strategist with Commonwealth Foreign Exchange in Washington.

Russian assets extended Monday's slide as investors digested the new round of U.S. sanctions targeting the country's tycoons. The rouble plunged 3.7 percent against the dollar and touched 63.925 per dollar, its lowest since late 2016. in Moscow calculated in U.S. dollars .IRTS fell as much as 4.8 percent after dropping more than 11 percent on Monday, but shaved most of Tuesday's loss to be down -0.8 percent. of Rusal, the aluminum giant highlighted prominently in the sanctions alongside its boss Oleg Deripaska, fell a further 8.7 percent in Hong Kong 0486.HK after slumping 50 percent on Monday.