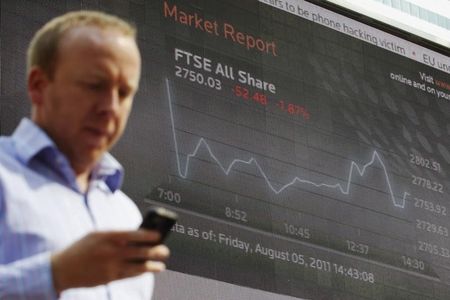 * Oil jumps over 3% after Iran shoots down U.S. drone

* Dollar falls to six-month lows against the yen

The Fed on Wednesday suggested rate cuts might start as soon as next month, saying it was ready to take action in the face of growing economic risks MSCI world equity index .MIWD00000PUS , which tracks shares in 47 countries, gained 0.5% on the prospects of further stimulus, heading for a third day of gains. The Euro STOXX 600 .STOXX rose 0.6% to six-week highs.

The dollar fell and benchmark U.S. and euro zone government bonds fell after the Fed's move. The dollar fell 0.4%, on course for its biggest two-day drop against a basket of other currencies .DXY in 14 months, and dropped to a half-year low against the Japanese yen. JPY=EBS

The Fed's rate signal came before meetings at major central banks in Asia and Europe that were expected to flag similar moves. The European Central Bank and the Australian central bank had signalled earlier this week more policy stimulus was needed.

The Bank of Japan left rates unchanged on Thursday but stressed that global risks were rising, suggesting it was leaning towards boosting monetary support. central banks were prepared to move in the opposite direction, though. Norway's central bank raised rates, as expected, sending the Norwegian crown up 1.7% against the dollar NOK=D3 and 1% against the euro. EURNOK=

The Bank of England left rates unchanged, as expected, and maintained its message that rates would need to rise gradually - as long as Britain can avoid crashing out of the European Union without an agreement. some investors expressed doubt over how much cutting rates could do to improve growth.

"The big worry through all this is that central banks have become a little confident, perhaps overly confident, in their ability to fine-tune things like inflation and growth," said Kevin Gardiner, global investment strategist at Rothschild & Co.

Elsewhere, oil prices jumped by more than 3% after Iran shot down a U.S. drone that its Revolutionary Guards said was flying over southern Iran, raising fears of a military confrontation between Tehran and Washington. TALKS Geopolitical risks elsewhere persisted, although hopes grew for progress in U.S.-China trade talks. The world's two biggest economies have imposed increasingly severe tariffs on each other's imports.

Chinese and U.S. officials will hold trade talks following instructions from their leaders, the Chinese commerce ministry said on Thursday, adding that Beijing hoped Washington would create the necessary conditions for dialogue. Barraud, chief economist at Market Securities in Paris, said stock markets had so far mostly dodged fallout from the trade war. He warned they could suffer if economic indicators worsen in the second half of the year.

"Equities are mainly benefiting from the easy money policy, without too much damage on the economic front," he said. "That may change in H2 ... metrics will likely weaken through the world because of the impact of ongoing tariffs." BOND YIELDS DROP The Fed's dovish tone caused the 10-year U.S. Treasury's yield US10YT=RR to fall as low as 1.974%, its lowest since November 2016. It reached 2.8% in January.

Government bonds elsewhere also fell, some to near record lows. Germany's 10-year government bond yield, a benchmark for sovereign debt in the euro zone, was down 2 basis points at -0.31%, testing this week's record low of -0.329%. DE10YT=RR

Brent crude futures LCOc1 were up $1.40 at $63.22 a barrel at 1109 GMT on the tensions in the Middle East and signs of improving demand in the United States.