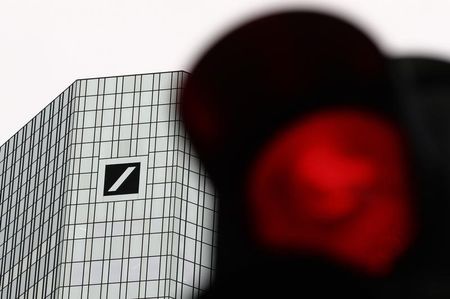 (Bloomberg) -- Want the lowdown on European markets? In your inbox before the open, every day. Sign up here.

Deutsche Bank AG (DE:DBKGn) Chief Executive Officer Christian Sewing said the European Central Bank missed an opportunity to reverse its negative interest rates when the economy was strong, stepping up criticism of policy makers ahead of their rate decision.

Speaking at the World Economic Forum in Davos, the head of Germany’s largest lender said cutting rates below zero was right after the euro crisis to “safeguard” the currency. But the longer low and negative rates persist, the bigger the gap between corporations and investors who benefit from cheap borrowing and those who are seeing their retirement savings erode, he said.

“We missed the exit,” Sewing said at a panel discussion on the same day ECB policy makers meet in Frankfurt. While he doesn’t see a quick reversal, he said he expects “one or the other” change under new ECB President Christine Lagarde.

Lagarde and the rest of the ECB’s governing council are expected to keep rates unchanged, but they will also announce the first appraisal of their inflation goal since 2003, plus a deep dive into new challenges such as climate change and digital currencies. Economic concerns for now have faded with U.S.-China trade tensions easing, Brexit back on track, and monetary support locked in.