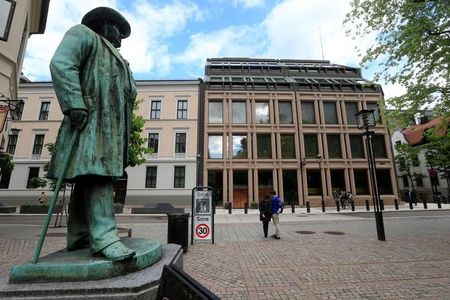 (Bloomberg) -- One of the last interest rate hawks could make a stand this week.

Norway’s central bank Governor Oystein Olsen faces a tough call on whether to stick to a plan to raise again and go against a global wave of easing that was kicked off by the U.S. Federal Reserve in July. Three of the six biggest Nordic banks expect Norges Bank to signal a September tightening at a rate decision on Thursday.

Olsen is trying to squeeze in a fourth increase since September last year to cap inflation and steer an economy that has bumped up against capacity amid a boom in investments in its offshore oil industry. Politicians in Scandinavia’s richest nation have helped fuel a long expansion by tapping a record amount of the country’s oil revenue to pay for tax cuts and a boom in infrastructure spending since 2014.

As others are mired in negative rates, Olsen and his colleagues raised their benchmark to 1.25% in June, the third increase in less than a year, and signaled another hike could come in September. Policy makers in Oslo convene for a so-called interim meeting this week and all economists surveyed by Bloomberg expect the bank to keep the key rate unchanged.

While it doesn’t issue a new report or forecasts at an interim meeting, it will after Thursday’s rate decision release a statement that could steer markets should it tweak its message from June that “the policy rate will most likely be increased further in the course of 2019,” with a preference for September.

Key economic indicators in Norway have been broadly as estimated by Norges Bank, but plunging oil prices and the cooling global outlook could make policy makers wary. But their plan to tighten is being helped by a near record-weak krone, which gives it room to raise rates without endangering exporters.

Here’s what local economists say about the upcoming decision: