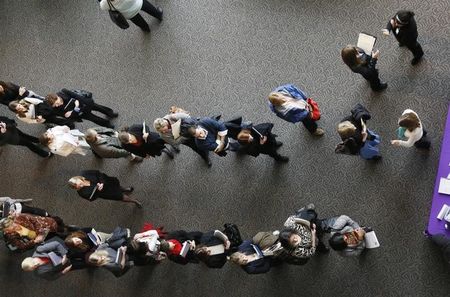 Investing.com -- The number of people filing initial claims for jobless benefits in the United States rose for a second straight week last week, further exposing the extent of the economy's slowdown as the Covid-19 virus ravages the country again.

The Labor Department said initial jobless claims rose to 778,000, well in excess of the 730,000 expected by analysts ahead of time. The previous week's number was also revised up by 6,000 to 748,000. Last week had been the first rise in initial claims for over a month.

Continuing claims, which are reported with a one-week lag, fell to a new post-pandemic low of 6.07 million, but this was slightly less than the drop expected.

The figures come at a time when the coronavirus pandemic is running more or less unchecked through much of the U.S., with the number of new infections running at around 170,000 a day over the last week. An average of 1,500 people have died of the disease every day during that time. The number of those hospitalized has leaped to a record 86,000, nearly tripling since the start of October.

The developments have forced the closure of more and more of the country's hospitality sector and other businesses considered non-essential, as state governors try to stop their hospitals from being overwhelmed.

U.S. stock futures were little changed after the news. By 8:45 AM ET (1345 GMT), the S&P 500 Futures contract was effectively flat, after hitting a new record high along with the Dow Jones Industrial Average on Tuesday. Markets have increasingly focused on the prospects for a vigorous economic recovery next year in recent days, as three separate pharma companies declared they had an developed effective vaccines against Covid-19.

Additionally, reports that President-elect Joe Biden will nominate Janet Yellen to be his Treasury Secretary have fostered hopes of a big fiscal stimulus package next year - if it can get past a Senate that it still in the hands of the Republican Party.

There was better news from the Commerce Department, which said that durable goods orders had risen 1.3% in October, more than expected. September's rise in orders was also revised higher. However, it left its estimate for third-quarter gross domestic product unchanged at an annualized 33.1%.