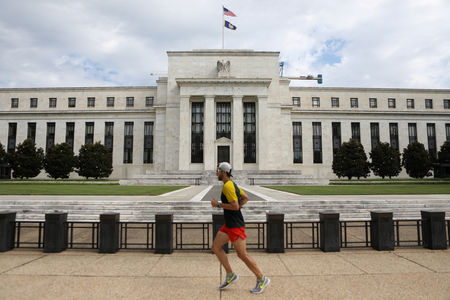 Investing.com - Federal Reserve policymakers expressed a willingness to persist with monetary policy support to keep the recovery on track as the impact of the pandemic continues to cast a cloud of uncertainty over the economic outlook, according to the minutes of the central bank's last policy meeting released Wednesday.

At the conclusion of its previous meeting on Nov. 5, the Federal Open Market Committee kept its benchmark rate in a range of  0% to 0.25% and pledged to maintain bond purchases at a $120 billion monthly pace.

The bond purchases have lowered longer term borrowing costs for businesses and households, and continue to help steer the economy through the pandemic.

In recent weeks, the sense of urgency to widen the liquidity spigot has been strengthened after Treasury Secretary Steven Mnuchin said he would allow the central bank's emergency lending programs – rolled out at the height of pandemic in March – to expire at year-end.

"The unilateral decision of Treasury Secretary Mnuchin to allow a slew of Fed emergency lending programs to close to new borrowers on December 31, despite Fed objections, increases the chance that the FOMC will step-up its asset purchases," Pantheon Macroeconomics said in a note.

The decision from Mnuchin was widely criticized as it comes as a time when another wave of coronavirus cases across the nation has seen parts of the U.S. impose lockdown measures that will slow the recovery.

Yet, hopes for a helping fiscal hand were given a boost on reports that President-elect Joe Biden will nominate former Fed Chair Janet Yellen as Treasury Secretary.

During her tenure as Fed Chair, Yellen was viewed as pro-stimulus, and if nominated is widely expected to support fiscal-boosting measures.

Treasury secretaries, however, don’t have direct control over fiscal policy. The former Fed Chair will likely have to contend with a Republican-held Senate that could keep fiscal policy options on a short leash somewhat.