Soybeans May Be Next Market to Surge as U.S. Showers Drag On

Soybeans May Be Next Market to Surge as U.S. Showers Drag On 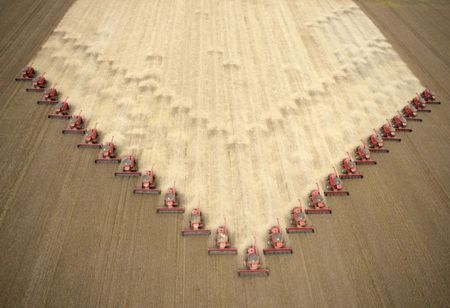 (Bloomberg) -- Corn prices have been on an epic run. Now, soybeans could soon be catching up.

With more rains forecast for the U.S. Midwest, oilseed plantings are under threat and hedge funds are backing away from their bearish wagers. Meanwhile, corn is heading for its best quarterly advance since 2010 and the funds are betting there’s more room to run, raising their net-bullish holdings to the highest in a year.

Fields are still flooded, keeping farmers from seeding and threatening yields. Cooler and wetter-than-normal weather remains in the forecast. The U.S. Department of Agriculture will update its plantings estimate on June 28, but analysts and traders are already concerned the agency’s numbers will be too high and not fully reflect the impact of the deluge.

“Most people would suggest this survey is a little dated,” said Rich Nelson, chief strategist at Allendale Inc. in McHenry, Illinois, referring to the USDA report.

In the weeks and months ahead, the agency likely will have to take down estimates both for U.S. soy acreage and yield to reflect major planting delays, Nelson said. That could boost soybeans prices that lagged behind corn’s big run. Most-active rolling futures are heading for a gain of less than 6% this quarter, while the grain has surged about 28%.

Soybeans have trailed for a reason. In the U.S., the oilseed can be planted later in the spring than corn. Amid the heavy rains, some analysts had forecast that the weather would eventually clear and farmers would plant more soy. That would’ve meant bigger production at a time when demand is already suffering amid the U.S.-China trade war.

But with more showers in the forecast, that scenario is becoming less likely.

“After the corn problem was realized, everyone started shifting their focus to beans,” Terry Reilly, senior commodity analyst at Futures International LLC in Chicago, said by phone.

As of June 18, investors slashed their soy net-short position by 39% from a week earlier to 55,307 futures and options, U.S. Commodity Futures Trading Commission data showed Friday. The figure, which measures the gap between bets on a price increase and on a decline, is the smallest since late March.

For soybeans, the trade outlook will also loom large. Donald Trump and China’s Xi Jinping are expected to meet on the sidelines at the Group of 20 summit held in Japan starting June 28. Any signs of an easing in tensions could also spark a move higher in prices. China is the world’s top soy importer.

“The impacts of the flooding and other events will continue through the 2019 growing season into harvest,” April Nelson, a Cargill spokeswoman, said in a statement Friday.