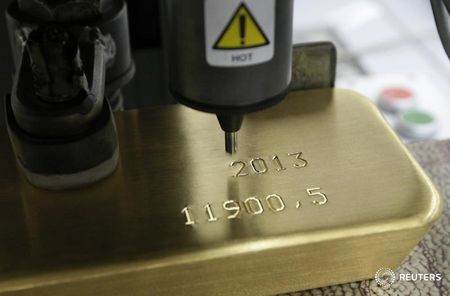 * Dollar gives up gains against most major currencies

Sept 20 (Reuters) - Gold prices rose on Friday and were headed for their first weekly gain in a month, supported by a softer dollar, tensions in the Middle East and caution about Sino-U.S. trade talks, while palladium climbed to a fresh record peak.

"A weaker U.S. dollar is giving gold a little bit of an upward drift," said Michael McCarthy, chief market strategist at CMC Markets, adding that "prices are still very much in the middle of a trading range and pinned to $1,500 level."

The dollar slipped on Friday and was headed for a third straight week of losses as central banks in Japan, the UK and Switzerland refrained from cutting rates. USD/

"Investors are all waiting on any further developments in the trade negotiations as they move towards October meeting and that may provide next big driver for gold prices," McCarthy said.

U.S. and Chinese deputy trade negotiators resumed face-to-face talks for the first time in nearly two months on Thursday, trying to lay the groundwork for high-level talks in early October. prices have risen about 17% this year mainly on U.S.-China trade tensions, concerns over the global economic growth outlook and prospects of monetary easing by central banks.

The Fed cut interest rates for the second time this year on Wednesday to help sustain economic expansion but gave mixed signals on future rate cuts. giving bullion a lift were tensions in the Middle East as the United States said on Thursday it was building a coalition to deter Iranian threats following a weekend attack on Saudi Arabian oil facilities. strategy for retaliation against the attacks on Saudi oil plants is not clear and the uncertainties are keeping gold's safe-haven bid intact, said Vandana Bharti, assistant vice-president of commodity research at SMC Comtrade.