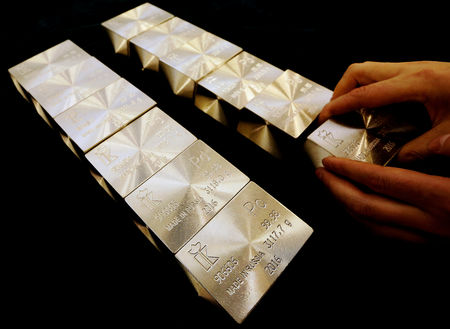 Sept 20 (Reuters) - Palladium soared to an all-time high on Friday, with producers locking in stocks of the auto-catalyst metal squeezed by a sustained supply shortage, while gold firmed en route to its first weekly gain in four supported by Middle East tensions.

"Modest producer hedging and speculative interest in an extremely illiquid market has driven borrowing costs in the metal sharply higher," said Tai Wong, head of base and precious metals derivatives trading at BMO.

"Last Friday it cost perhaps a percent to borrow for a month annualised , today it has been borrowed at 5%. The market has been and remains in fundamental deficit, so conditions are likely to remain tight for some time."

The price of palladium, used mainly in emissions-reducing catalysts for vehicles, has surged about 30% this year.

"Fundamentals have not changed but no one buys way in advance. They buy when they need, typically manufacturers. So manufacturers have come in and done some long-term hedging, driving the price high," said an analyst based in New York.

"And when a trend starts occurring like that, then you have the industries jumping on the bandwagon, which drives it even higher."

"It's a bullish consolidation we see," said Fawad Razaqzada, market analyst with Forex.com, adding that bullion is also being supported by safe-haven interest driven by tensions in the Middle East.

"(The) Global outlook still looks quite unfavourable and central banks around the globe will continue to ease monetary policy, which will be beneficial for gold," said FXTM analyst Lukman Otunuga.

Markets also focused on U.S.-China trade talks in Washington before high-level discussions next month. XAG= firmed 0.3% to $17.83 an ounce, up about 2% for the week and was heading for its first weekly gain in three, while platinum XPT= remained flat at $937.82.