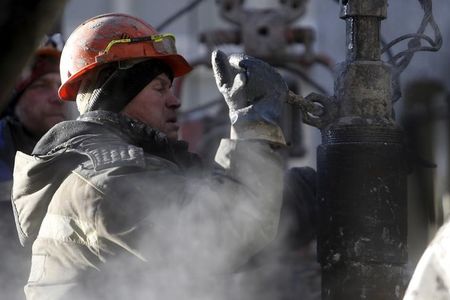 Investing.com - Oil prices pushed higher Thursday, heading for a sixth consecutive day of gains which would be the longest positive run in 15 months, as production cuts helped rebalance a market from the coronavirus-inspired hammering.

Data from the Energy Information Administration late Wednesday showed a draw of 4.98 million barrels last week, the most since December, backing up the American Petroleum Institute’s estimate, released Tuesday.

North American drillers have also chipped in. The U.S. rig count, an early indicator of future output, fell by 35 to a record low of 339 last week, according to data from energy services firm Baker Hughes.

Producers in Canada's Alberta province have also cut output by over one million barrels a day, according to Alberta's energy minister Sonya Savage, and those volumes will only be restored gradually once market conditions improve.

Crude has risen more than 80% this month as production cuts have kicked in and demand has started to return.

However, there’s still a long way to get back to pre-virus levels of consumption and there’s also a risk that a sharp jump in prices for physical cargoes encourages output to come back too early.

Oil shut-ins may be at their peak right now in the U.S., said Dallas Fed President Robert Kaplan in an interview on Bloomberg.

"A lot of those shut-ins will come back by the end of the year,” Kaplan added.

“There’s growing optimism that you’re going to see a continued pick-up in oil demand, and that’s heavily reflected in prices now,” said Edward Moya, a senior market analyst at OANDA. “However, higher prices are going to trigger some non-compliance” with output cuts.