In the retail and music world, platinum is often thought to be more valuable than gold, a notion reinforced by the platinum credit card and the platinum record. In the commodities world, this also holds true whenever the white metal trades at prices higher than its yellow cousin.

Now, as platinum’s discount to gold falls at its most rapid pace in years, those playing the spread between the two are wondering how much narrower the gap will get—and whether the outcome could significantly change the pecking order in precious metals.

The difference, going forward, will not be very much, according to UK’s Metals Focus, which published an indepth study on the spread and the fundamentals of the metals on both sides of the game on Tuesday.

Gold Will Likely Stay On Top

The consultancy found that gold will likely remain on top of platinum through the end of 2018 and could even marginally expand its premium to the white metal of around $380 an ounce by next year.

“While platinum prices should rise over the short-to medium term, we do not expect this gap to fall significantly further,” it added.

Notwithstanding the surprise weakness in the dollar, this week’s headlines have raved at gold’s ability to cling to the $1,200 an ounce level that’s key to market bulls, despite an oncoming US rate hike. 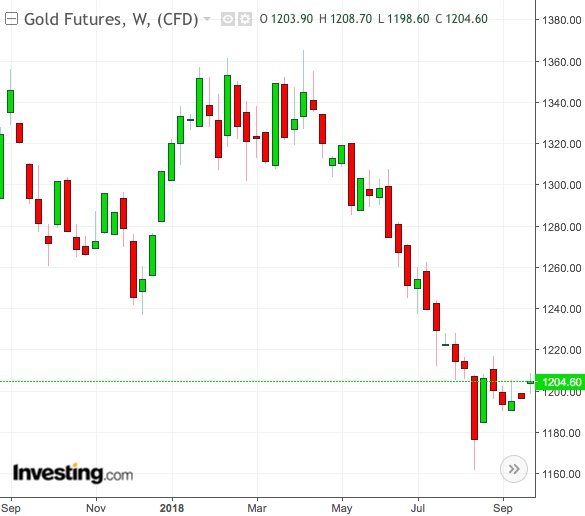 But at a deeper level, the stories have questioned bullion’s woeful slide from 18-month highs of $1,361.40 in February. Year-to-date, gold is down 8 percent, with the US December delivery contract settling at $1,205.10 on Tuesday.

Platinum, meanwhile, is 11 percent lower on the year. Yet, it has performed relatively better to gold in recent days, hitting six-week highs of $839.00 on Friday. In Tuesday’s session, the most-active US platinum contract for January settled at $827.80.

Historically, the spread between the two metals has seldom been as wide as this. Metals Focus’ charts show platinum having the advantage over gold for two years through January 2015, before it turned to a discount.

While the pace of the white metal’s recovery now—a deficit of $40 in its discount to gold within days—has got spread players excited, Metals Focus drew attention to what it described as unsupportive fundamentals for platinum. 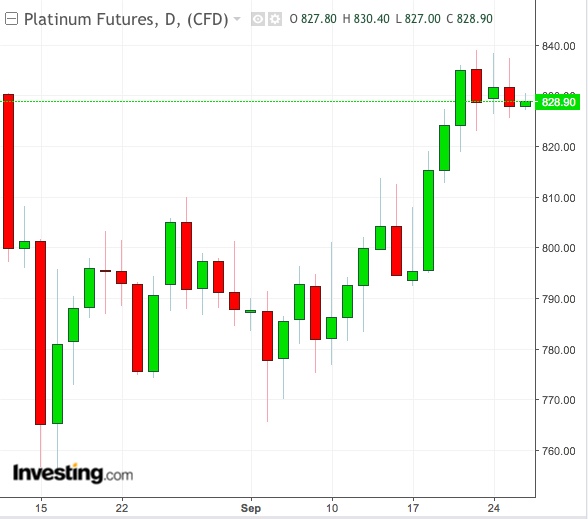 The London-based consultancy, which gathers information from a database of 1,100 mines, cited comfortable supplies for platinum against weak demand from jewelers as well as carmakers which use the precious metal as an emissions purifier and performance catalyst in diesel engines.

Metals Focus said although low rand-based platinum prices in South Africa have led to some supply rationalization, higher revenues enjoyed by mines in that country from stronger palladium prices have kept them from cutting too much of their platinum output. Like platinum, palladium is also used in jewelry and is a catalyst for gasoline engines. Palladium currently trades at over $1,050 an ounce, or 25 percent above platinum due to its more superior fundamentals.

“This year, we, therefore, expect global mine supply (of platinum) to slip by 2 percent to 6.0 million ounces,” Metals Focus said.

That drop will be offset by an identical 2 percent deficit in global platinum demand as the white metal faces pressure on both the jewelry and automotive fronts, the consultancy noted. The firm added:

“Although diesel’s (engine) share in Europe appears to have stabilized over the past four months, we still expect global automotive platinum to drop by 3.7 percent in 2018 to 3.2 million ounces.”

On the whole, the platinum market will likely see a surplus supply of around 190,000 ounces this year, Metals Focus added.

“By itself, this is not significant. However, this will mark the seventh surplus since 2010, which means that platinum’s above-ground stocks, will have risen by some 2.2 million ounces between end-2010 and end-2018, to a noteworthy 8.8 million ounces.”

Gold, despite its tame outlook now, will strengthen if bets for a US economic slowdown in the medium-term come true, prodding investors towards risk-off assets, Metals Focus said. “We also expect the dollar to weaken as (this) dynamic encourages the Fed to adopt a more dovish stance.”

In conclusion, Metals Focus said it expects gold to average at around $1,330 in 2019, against $940 for platinum, translating to a discount of $390 for the latter. That’s hardly a change from today’s levels, meaning platinum-gold spread players ought to be more wary than excited.