Futures contracts on the Dow, S&P, NASDAQ and Russell 2000 wobbled on Wednesday morning as markets continue to speculate on the US economic aid package, as well as concerns that new lockdowns in Europe will dent the economic recovery.

Treasuries sold off, driving yields higher and gold climbed on a weaker dollar but was weighed down by risk-off.

In pre-US market trading on Wednesday, the S&P 500 futures climbed for the second day, but pared gains upon reaching a technical resistance. 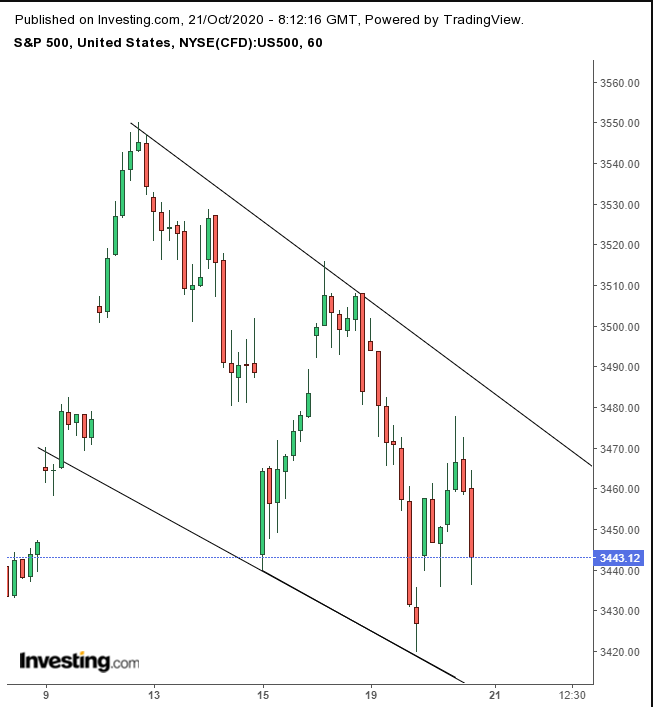 The contract retreated from the top of its falling hourly channel since the Oct. 2 high.

In Europe, the Stoxx 600 Index opened higher but was in a decline a minute later and has been extending its fall since. 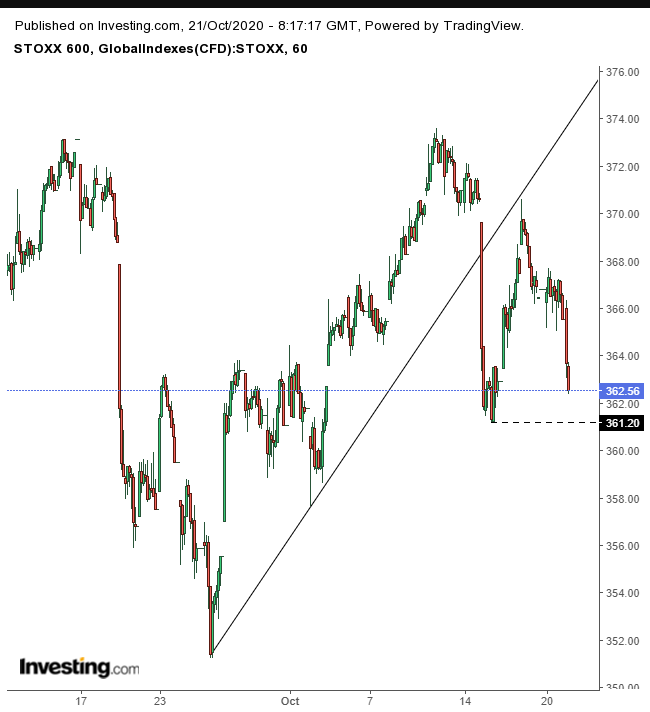 The decline is an extension since the pan-European benchmark peaked on Monday, finding staunch resistance at its broken uptrend line since the Sept. 25 low. A fall below 361.20 would establish a second lower trough and a downtrend in the very short-term.

In the US, stocks rebounded Tuesday as Republicans and Democrats continued negotiations on the fiscal aid package. The S&P 500 returned from Monday’s drop, after Federal Reserve Bank of Chicago President Charles Evans said that he was “somewhat optimistic” about the continued economic recovery into next year.

Fed speak countered continued haggling by lawmakers as a Republican majority-senate signaled it would approve a bill at just one quarter of the near $2 trillion negotiated by House Speaker Nancy Pelosi.

Confident investors sold Treasuries, including the 10-year note, to finance their equity purchases. 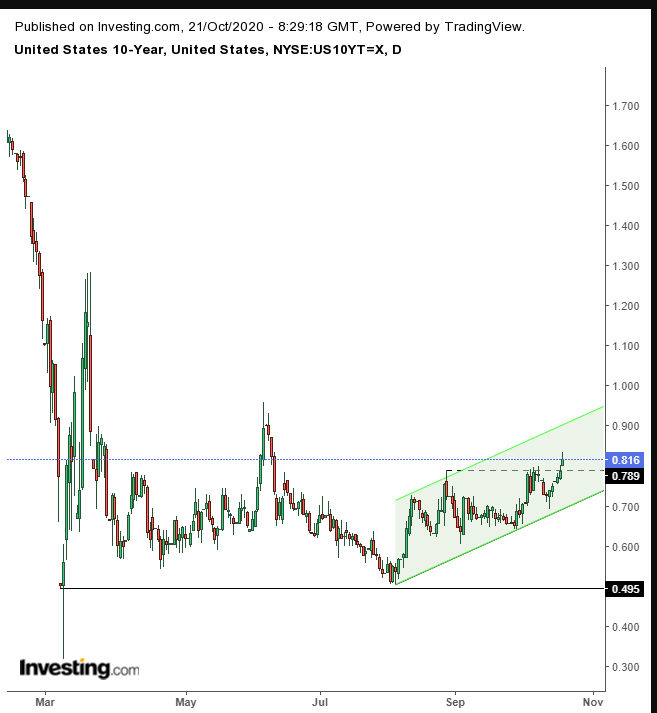 The move allowed yields to rise and extend the short-term uptrend since the early-August bottom. Its next test would be the June 5 high.

Optimism on a fiscal aid package—which adds dollars into the economy—reduces the value of the dollar. It also adds to the pressure on the greenback from foreign holders selling American bonds to reroute capital to risk assets. 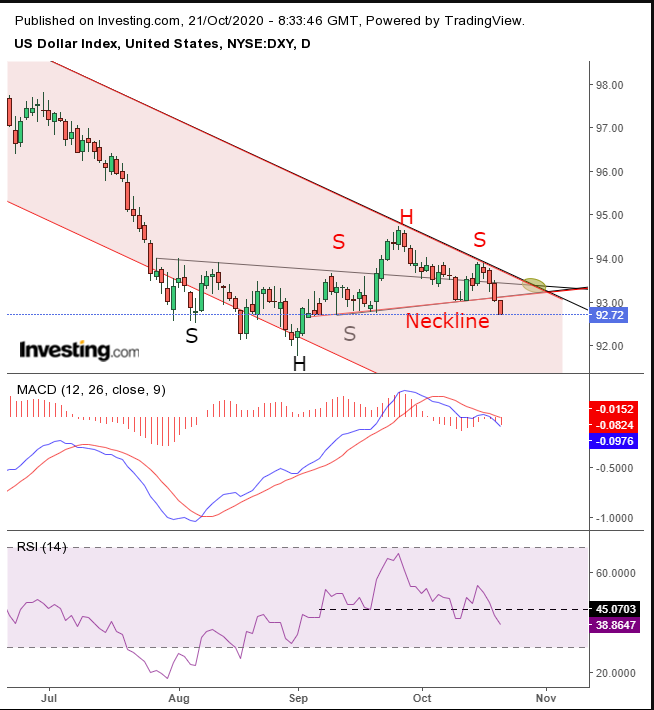 The dollar dropped for the fourth straight day—it’s longest downward trend in almost three months—blowing out its H&S bottom. A second H&S pattern, though this one is a “continuation” pattern, bearish within its underlying downtrend, as framed within the falling channel.

Gold was boosted by dollar weakness, but its gains were offset by investors selling the yellow metal due to its haven status, as they increase positions in equities instead. 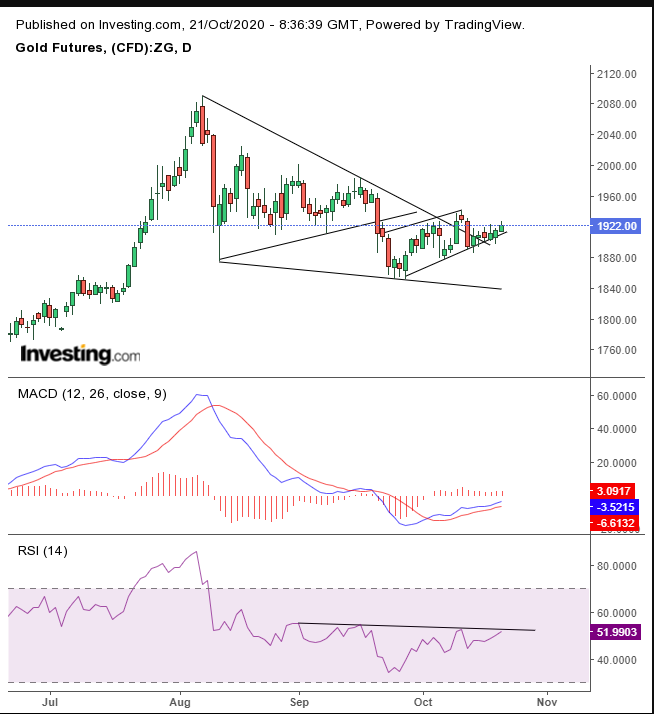 While gold inched above a bullish wedge, it might still complete a bearsh flag, following a bearish pennant. A decisive upside breakout is necessary, with at least one long, green candle, to gain traders’ trust in the wedge’s completion. Such a move will also complete an RSI bottom, a bullish signal to join the MACD’s buy signal.

Bitcoin climbed for the fifth day in a row, its longest since Oct.12. 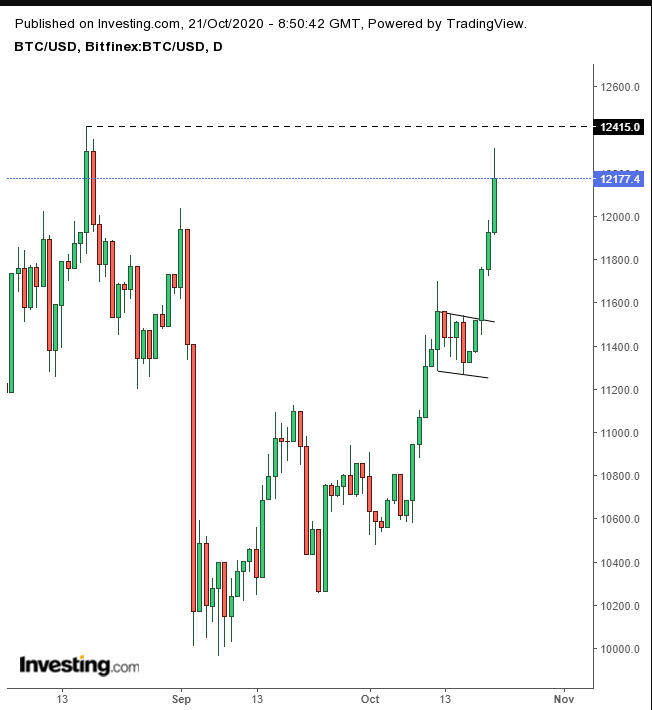 The rally is the longest since Oct. 12 which began a falling flag, bullish after the preceding five-day rally. The next test of the supply-demand balance is the Aug. 17, $12,415 peak. 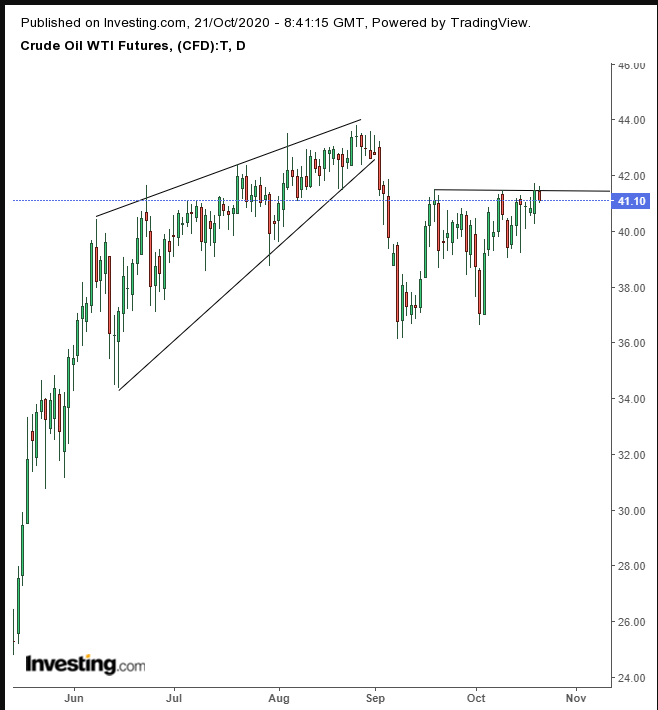 The drop confirmed a pocket of supply at this level. Given that the range follows the completion of a bearish wedge, it’s more likely that WTI will fall at least to retest the $36-7 levels of the range bottom.