US futures, including the Dow, S&P, NASDAQ and Russell 2000, as well as European stocks are all in the red on Monday as the number of coronavirus cases in Europe and the US continue to increase.

Traders are concerned that governments may introduce additional social restrictions to curb the spread of the virus which could further dent the global economy. Oil also fell on concerns over tougher travel restrictions.

The pandemic’s momentum is accelerating, increasing the risk of a second lockdown in the UK and other European countries. The UK's Chief Medical Officer, Chris Whitty is expected to warn later today that the country is at a “critical point.”

Meanwhile, Germany's health minister, Jens Spahn said that European case-trends are “worrying,” and he urged people to remain vigilant. Over the weekend, the number of deaths in the US neared 200,000 and the CDC is predicting that the US death toll could reach 218,000 by Oct.10.

Investors expect that any indication of progress on America’s long-awaited fiscal stimulus package may turn the selloff around, after Federal Reserve Chair Jerome Powell said that government aid for businesses damaged by coronavirus shutdowns had been "critical" to the US economy.

All four major US contracts were hovering around -1.5% this morning, with futures for the small cap Russell 2000 down around 2%.

The Stoxx Europe 600 slumped, pressured by airline and travel stocks, as well as a 6% decline in shares of HSBC (LON:HSBA). The bank underperformed the 3.5% decline in the benchmark FTSE 100 Index. It hit  a 25-year low on new revelations over the weekend that several global banks had allegedly been involved in money laundering for over 20 years.

On Friday, US stocks fell to a six-week low, weighed down by tech stocks, as investors cashed out due to the lack of a catalyst to take stocks higher. The S&P 500 Index declined for the third straight day after whipsawing amid Friday’s quadruple witching, a quarterly event fueling volumes, as large positions in derivative contracts roll over. 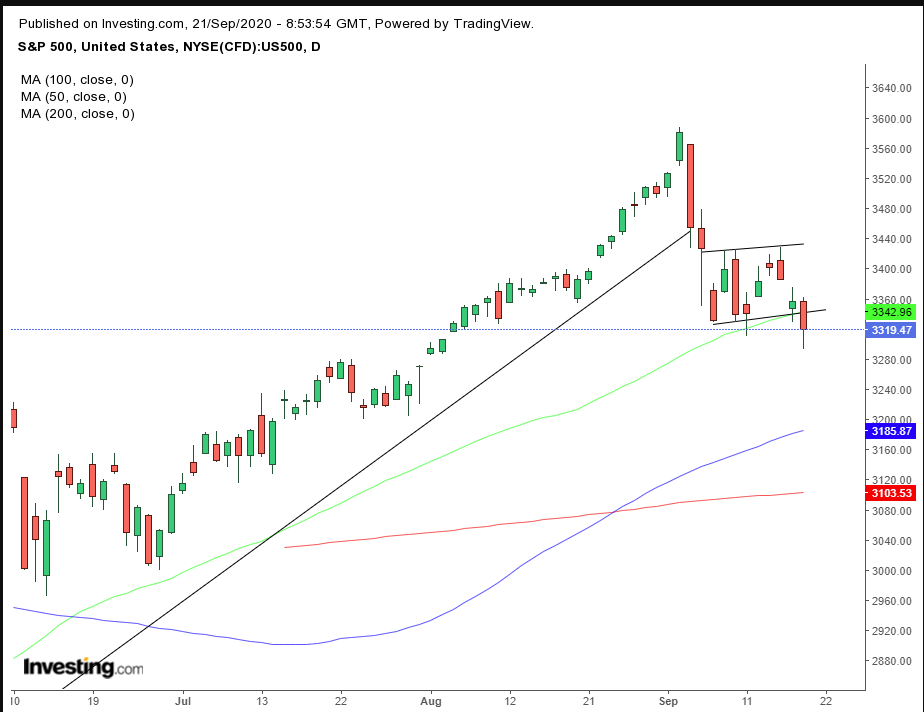 After falling below its uptrend line, the S&P 500 fell below its 50 DMA, which was providing a support to a two-week range. The pause in the drop appears to be a rising flag, bearish after the 7.2% preceding slump in as little as four sessions from the all-time high. Now, the 100 MA beckons, where it supports the preceding low in the uptrend line. A fall below that would establish a new downtrend, something the NASDAQ indices already registered.

Investors increased Treasury positions, pushing yields on the 10-year down to the lowest in almost three weeks.

The greenback continues to struggle between a falling channel and a possible bottom.

WTI reversed course after its best week since June, having surged 10%, on concerns that further lockdowns with hamper demand. 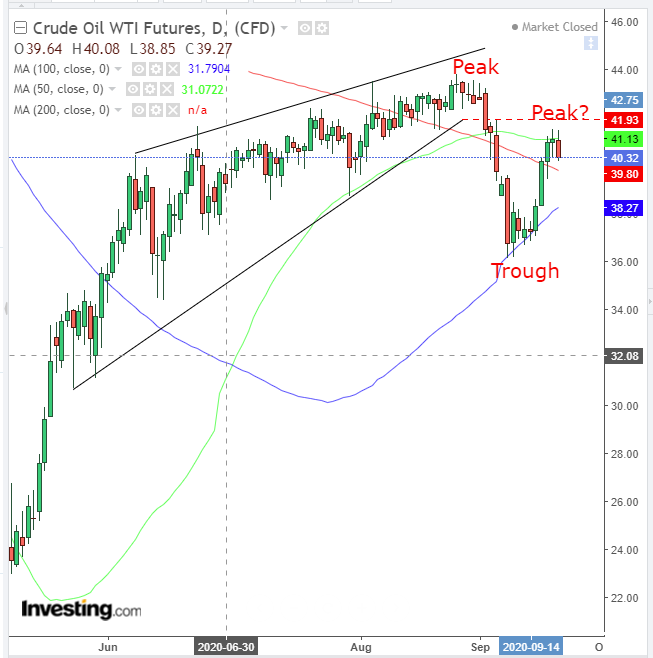 Technically, a bearish reversal upon a return move to the rising wedge confirms another leg down.