US futures, including for the S&P, Dow Jones and NASDAQ, as well as European stocks followed Asia higher on Monday as positive economic news out of China lifted sentiment. However, at the time of writing, contracts on the Russell 2000 had reversed lower. As well, a surge in European cases of COVID-19, offset some of the upbeat mood.

The dollar is slumping as gold pushes higher.

Investor sentiment was buoyed by news of the quick recovery in China. The world’s second largest economy is the only major economy to avoid a recession as a result of coronavirus lockdowns and is now forecast to grow 1.5% this year.

Among US contracts, NASDAQ futures outperformed this morning, extending their lead from Friday. The tech index posted a 4.6% increase last week, its strongest weekly gain since July.

Banks led the European Stoxx 600 into the green in early trade on Monday, while travel stocks fell as British and Italian authorities contemplate tightening restrictions on their travel corridor, and Germany looks to reduce travel and gatherings.

After an eight-day holiday, China went back to work, leading Asian indices higher, with the Shanghai Composite (+2.6%) and Hong Kong’s Hang Seng (+2.2%) far outperforming after the PBOC eased regulations on shorting the yuan. The central bank removed the requirement that financial institutions have to set aside 20% of the previous month’s yuan forward settlement amount as foreign exchange risk.

US indices, including the Dow and Russell 2000 climbed Friday for the third day in a row, sealing in the biggest weekly gain since early July, after President Donald Trump said he wanted a bigger stimulus package than the $2.2 trillion that Congressional Democrats have been fighting for.

That about-face followed the president tweeting earlier last week that negotiations between House Speaker Nancy Pelosi and Treasury Secretary Steven Mnuchin should stop until after the Nov. 3 presidential election. On Saturday, the White House flip-flopped yet again, saying it wanted the aid package to come in at $1.8 trillion. Updates on negotiations are expected to continue dominating markets for the coming weeks. 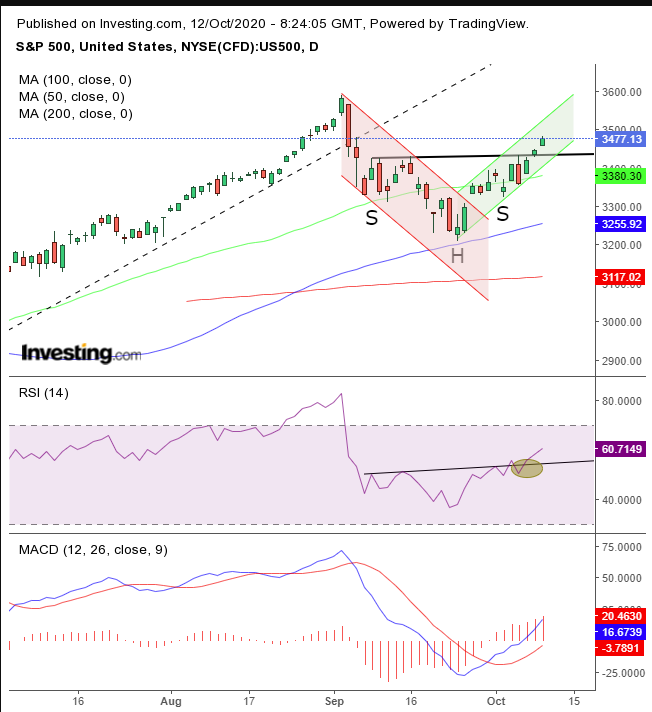 The move implies a target that exceeds the Sept. 2 all-time high.

Bond markets are closed for the Columbus Day holiday in the US. Yields finished Friday little changed, after Treasuries, including the 10-year note, whipsawed between gains and losses.

The dollar appears to have ended its short-term uptrend. 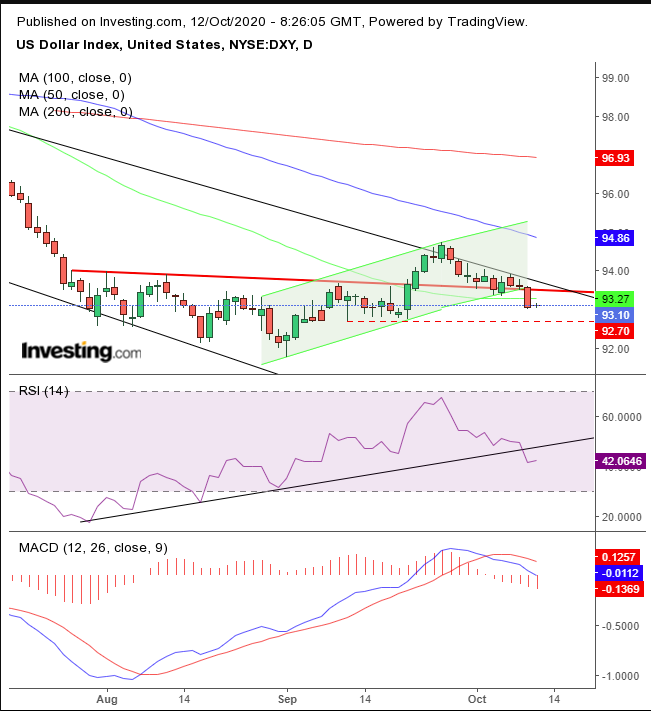 The greenback is resuming its medium-term downtrend, in place since the March highs.

Gold may have extended an upside breakout to a bullish rising wedge, though it might still resume a downward path according to its current rising flag and its preceding bearish symmetrical triangle. 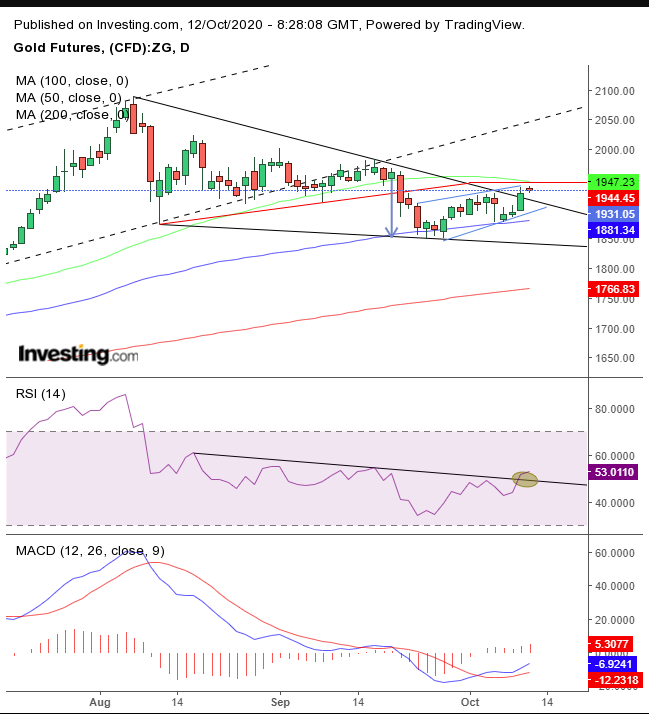 A break above $1,950 would increase the chances that the bulls will have the final say. 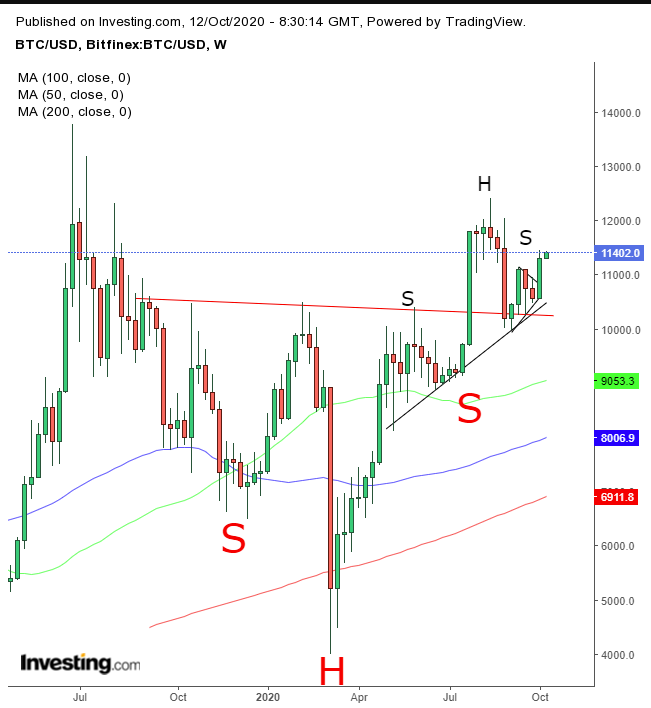 This may lead the cryptocurrency to another, larger top—confirming a massive H&S bottom since Aug. 19.

Oil fell and is retesting $40 with supply constraints easing. Libya’s largest oil field is expected to return to full capacity in 10 days. 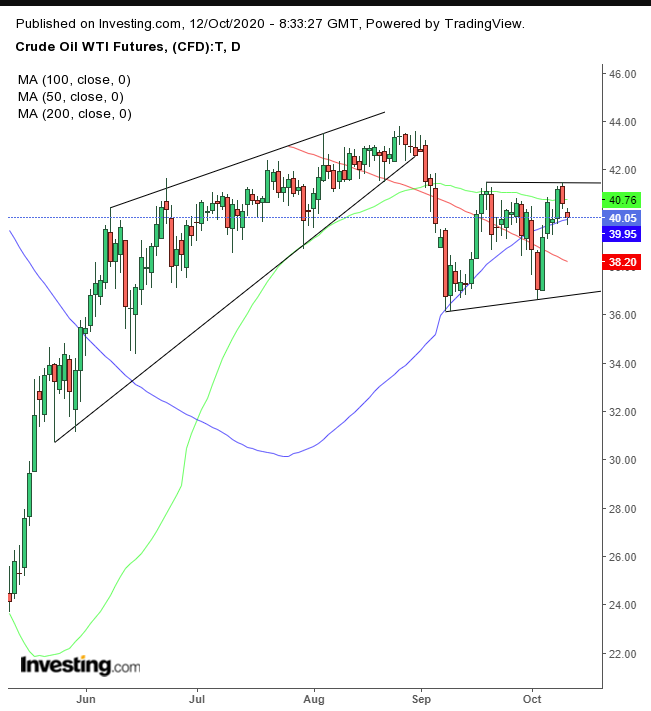 The return of operations in the US Gulf of Mexico after Hurricane Delta, has raised the prospect of further supply. Oil’s fall from the Sept. 18 highs increases the chances of a continuation pattern, to extend the decline following the bearish rising wedge.