All four US futures, the Dow, S&P, NASDAQ and Russell 2000, are up along with Chinese shares and the yuan, leaving behind mixed Asian markets this morning and yesterday's flat European markets.

China announced a 5.6% YoY increase in industrial production in August, showing its economy is accelerating out of the coronavirus slump.

US futures have rebounded from an initial drop, retesting yesterday’s closing price for the contract.

The return to positive territory was a response to data showing China’s economic recovery is gaining pace. 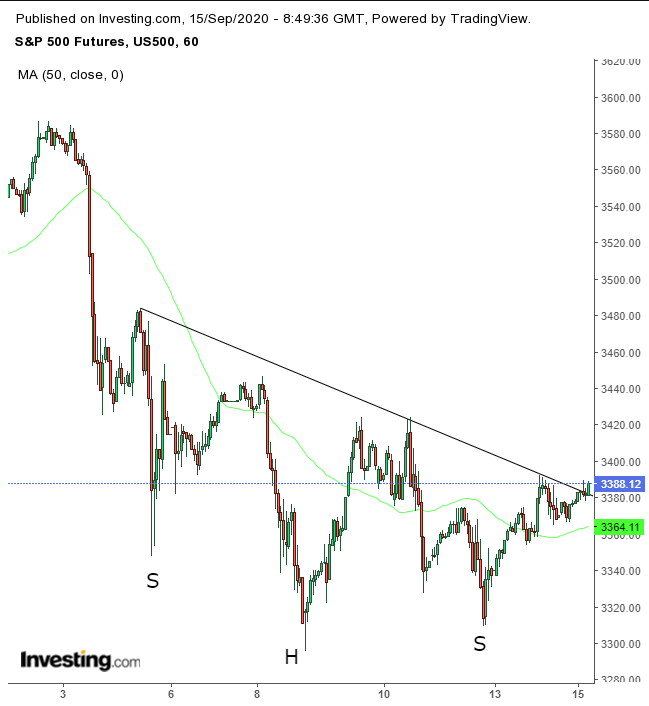 However, from a technical perspective, the contract is struggling against a downtrend line, whose upside breakout would complete an hourly H&S bottom.

European shares were little changed yesterday. Bank shares fell ahead of the US and UK policy decisions which offset the good news from the world’s second largest economy, as well as strong results from Sweden’s H&M (OTC:HNNMY) which surged 12% after beating estimates.

China's figures for August's industrial production were ahead of market forecasts, up on July numbers and showed expansion for the fifth month in a row. According to HSBC economists, “the activity data today shows that the recovery in the private sector gained momentum in August. The recovery in China has become more balanced and broad-based.”

Asian stocks were mixed in early morning trade, despite the Chinese figures improving sentiment, and the yuan hit a 16-month high.

South Korea’s KOSPI gained for the fourth straight session this morning (+0.82%), and closed at its highest level in more than two years.

However, Japan’s Nikkei (+0.4%) slipped at the end of the session. The stronger yen weighed on exporters, and investors cashed profits after a three-day rally in the run up to the ruling party election, where market-friendly Abe ally, Yoshihide Suga was picked as the new leader.

US shares climbed for the second day yesterday, boosted by a number of corporate deal announcements and news suggesting some progress on a coronavirus vaccine.

Oracle (NYSE:ORCL) leapt over 4% after the software giant reportedly beat Microsoft (NASDAQ:MSFT) in a bid to partner with TikTok’s US operations. Immunomedics (NASDAQ:IMMU) almost doubled after Gilead Sciences (NASDAQ:GILD) agreed to buy the cancer drugmaker for $21 billion.

The S&P 500 Index reached a weekly high before it receded to a 1.25% gain, and the NASDAQ advanced over 1.8%, ending a two day slide, after Pfizer (NYSE:PFE) CEO Albert Bourla announced the possible deployment of its COVID vaccine before the year ended. 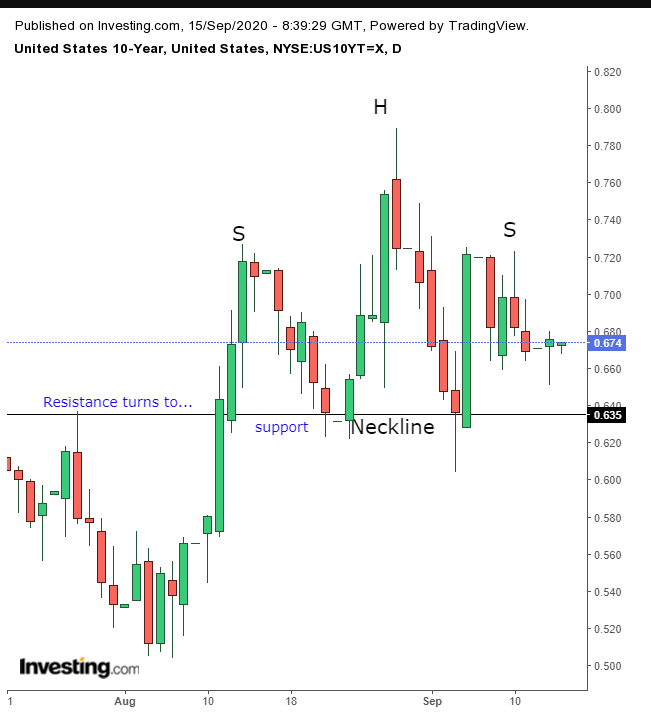 Rates’ trading pattern yesterday was the opposite of equities, which first climbed higher, then pared gains.

Technically, yesterday’s trading developed a bullish hammer, an attempt to base a support above the neckline of a H&S top.

The dollar fell for the third day, extending losses. 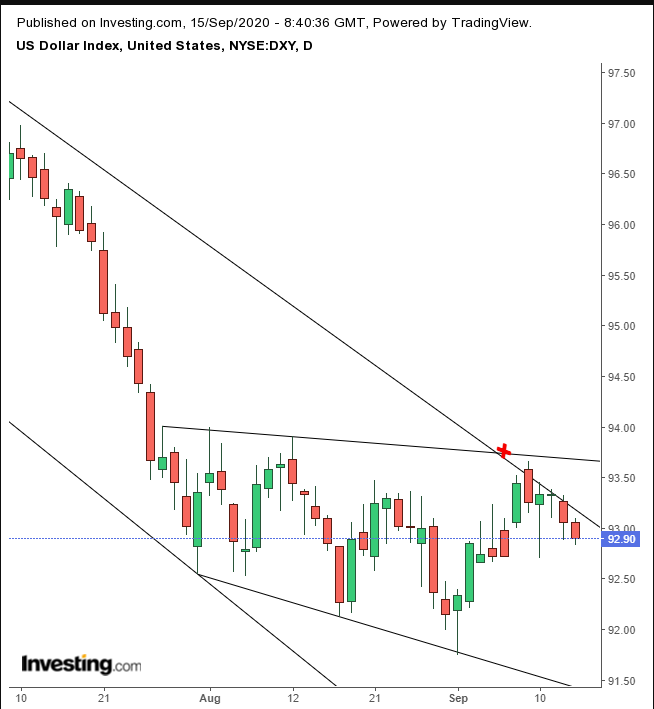 The greenback found resistance at the focal point of two falling channels. 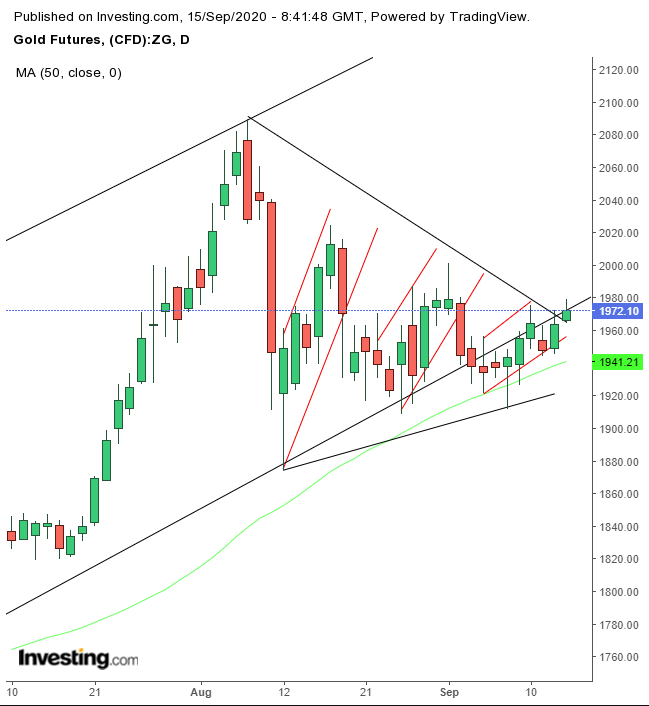 The yellow metal remains between an upside breakout to complete a bullish pennant within a rising channel and a third-consecutive, smaller bearish rising flag. 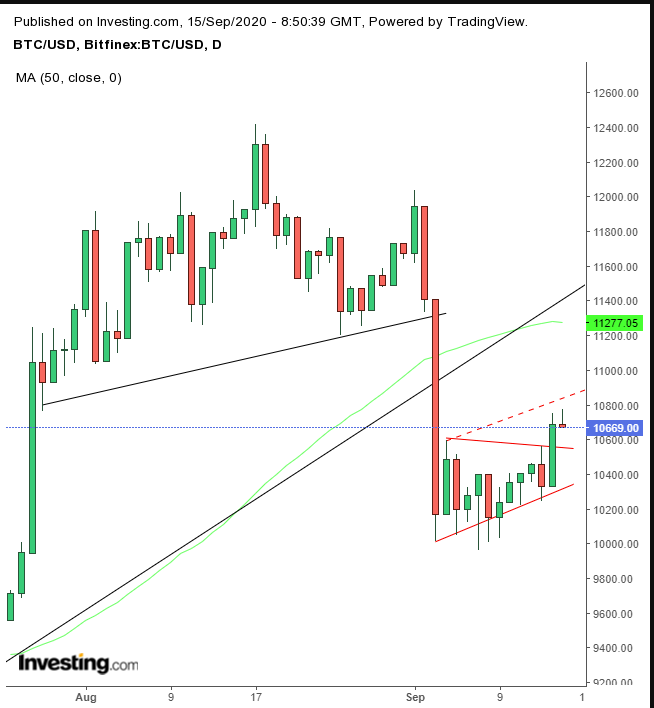 Bitcoin may have either blew up a bearish flag or endarkened it, which will become official if oil falls back toward the pattern’s bottom.

Oil held near $37 a barrel before US government data that’s forecast to show higher crude inventories. 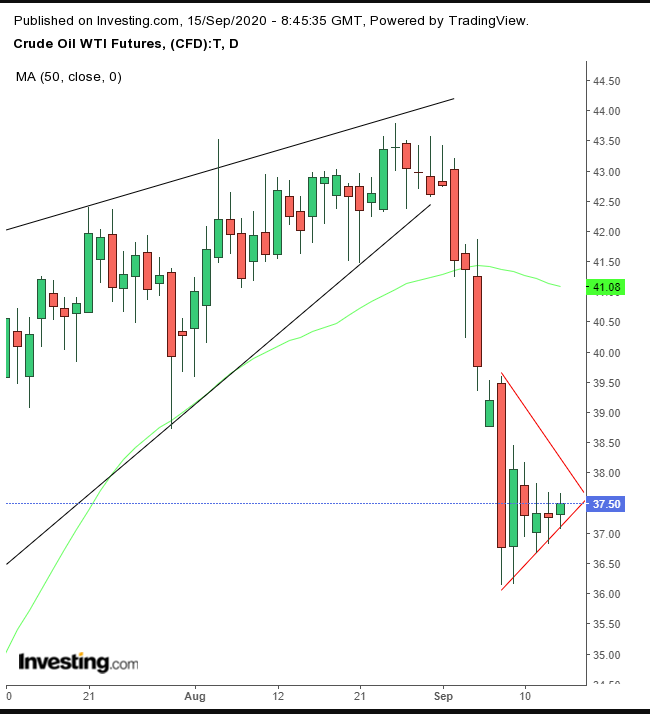 From a technical standpoint, oil is developing a pennant, a second bearish pattern after the rising wedge that followed a climactic climb over the $40 level.