US futures for the Dow Jones, S&P 500, NASDAQ and Russell 2000 all jumped on Tuesday, along with European and Asian shares.  The optimism was spurred by lingering hopes of a resolution to the Congressional stalemate regarding additional US fiscal stimulus and by what appear to be easing tensions on the Sino-US diplomatic front.

Yields reached their highest level since late July, the dollar's rally fizzled and gold was sold off.

Contracts on the four main US benchmarks were at least 0.5% higher this morning, with small caps and the mega cap YM outperforming at time of writing.

The Stoxx Europe 600 Index Index jumped at the open, hoisted by automobile manufacturers such as BMW (DE:BMWG) and Renault (PA:RENA) as well as travel and leisure stocks including International Airlines Group (LON:ICAG), cruise operator Carnival (LON:CCL) and InterContinental Hotels Group (LON:IHG), even after the latter posted a loss and halted its dividend. 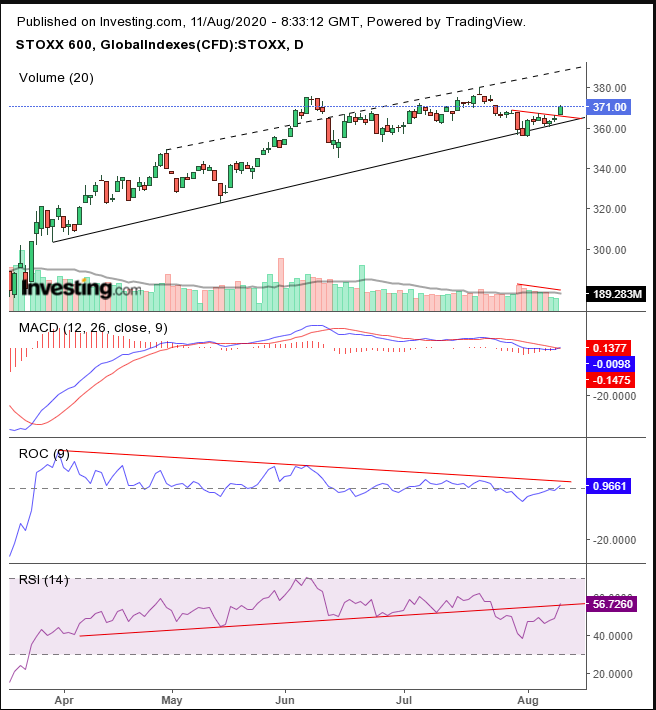 Though the pan-European benchmark completed a H&S bottom on the hourly chart—on a rising gap, confirming the rising channel bottom support—volume faded and a slew of indicators faced resistance.

Earlier Tuesday, Asian indices were mostly green as foreign investors increased regional holdings of emerging markets assets for the second straight month. However, China’s Shanghai Composite was uncharacteristically depressed, (-1.15%), as the US-China relationship was back in focus ahead of a meeting between top trade officials to review the first six months of the Phase 1 trade deal.

On Monday, during the Wall Street session, stock performance was uneven as investors sold off some big gainers that had pushed equities to near-record highs. The S&P 500 Index closed a mere 0.76% from its Feb. 19 record.

At the opposite end of the spectrum, the NASDAQ fell 0.4% for the second consecutive day, for a total decline of 1.25%. This marks the tech-heavy benchmark’s first back-to-back selloff since May 13.

Yields, including for the 10-year Treasury note, reached their highest level since July 27. 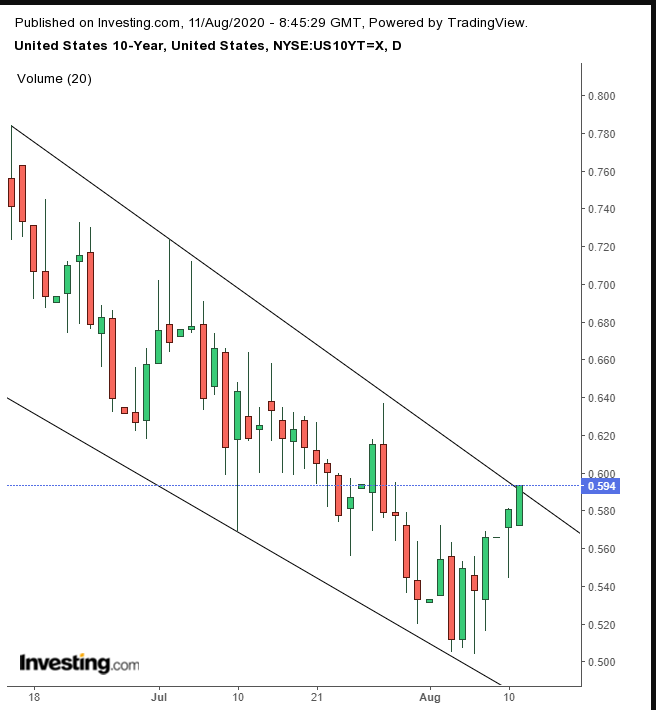 Rates are struggling against the top of a falling channel. 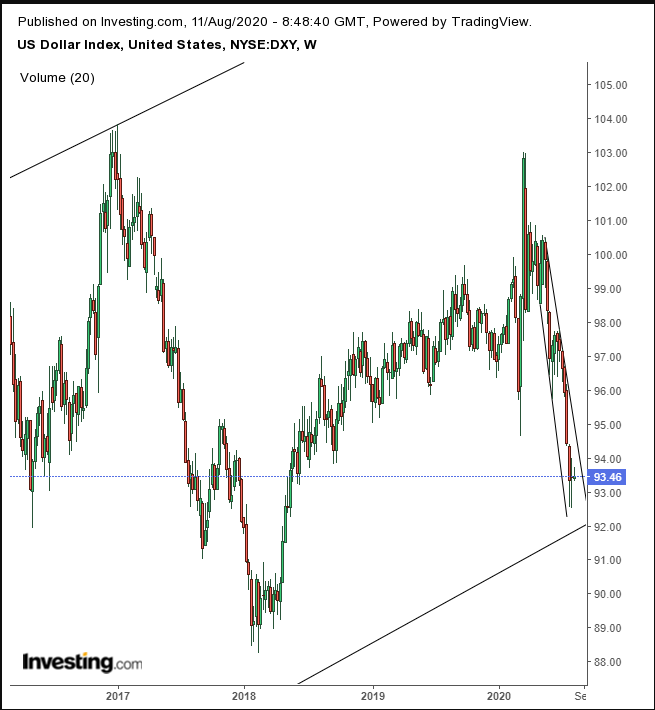 Technically, the greenback’s churning for over a week underscores the importance of this technical vortex—where the downtrend from the March high meets with the uptrend since the 2008 bottom. The USD reached the bottom of a rising channel since 2009, visible in the chart above.

Gold lost over 2%. It was the second, sharp selloff for the yellow metal within three days, for a total decline of 3.4% and the worst slump since the March bottom. 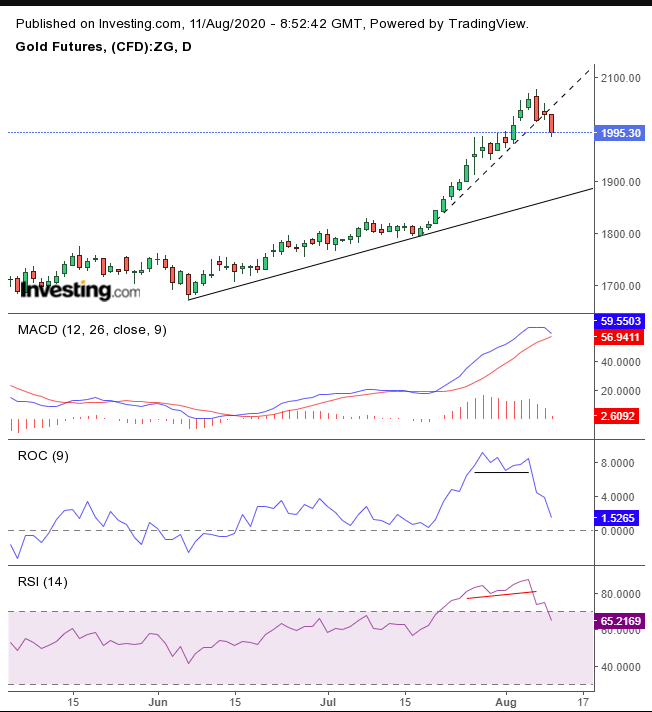 Both the ROC and RSI momentum-based indicators topped out, while the price-based, lagging MACD appears about to be triggering a bearish cross—suggesting a sharper pullback toward the uptrend line, currently at $1,900.

Oil climbed for a second day, crossing midway to $43 a barrel, its highest level since March 5. 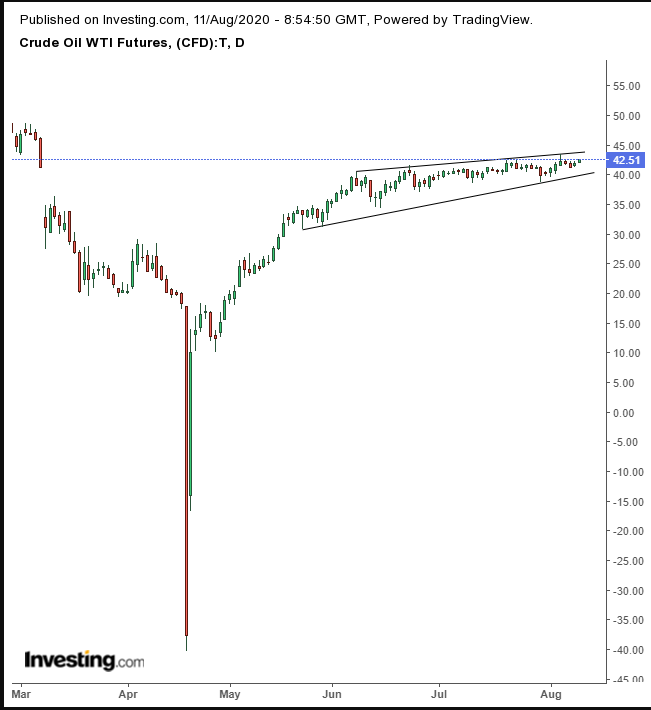 WTI still seems to be trapped by the market dynamics following perhaps the worst falling gap in its history on March 9, which erased about a quarter of its value.