On Wednesday, US futures for the Dow Jones, S&P 500, NASDAQ and Russell 2000, as well as European stocks, all priced in progress toward an agreement on the next US stimulus package, even though the rhetoric from Congress and the Trump administration indicate an ongoing stalemate. Positive earnings also helped lift shares.

All four contracts for the major US benchmarks were solidly green this morning, albeit with an interesting twist—technology-heavy NASDAQ futures have been underperforming while contracts on the Russell 2000 rose 0.9%, twice that of tech which usually leads markets and recently spearheaded global rallies.

During the Asian session, most regional indices finished higher, though Australia's ASX 200 and Japan's Nikkei 225 both finished in the red.

Tuesday, American stocks crawled higher on hopes of a resolution to the coronavirus relief bill. Pressure on both Democrats and Republicans from millions of constituents is growing, with many now no longer receiving additional unemployment benefits and over 40 million at risk for eviction.

Still, the two sides were hardly any closer to agreement, though negotiations are ongoing. According to White House Chief of Staff Mark Meadows: “Secretary Mnuchin is prepared to make a few proposals that hopefully will be met with enthusiasm, and yet we’re a long ways away from, from striking any kind of a deal.”

We can't seem to shake the feeling that the market is headed for a reckoning, even with—or perhaps in spite of—stocks now back to pre-pandemic levels, and the rally's leader the NASDAQ achieving yet another record, even as gold hits its own new record. It's clear the market is pricing in stimulus even though that's not necessarily now guaranteed. Nevertheless, whether that's going to happen or not investors on one side of that bet will win big, while those who made the wrong choice, will lose big.

Despite the equity rallies, yields, including for the 10-year Treasury note, moved higher. 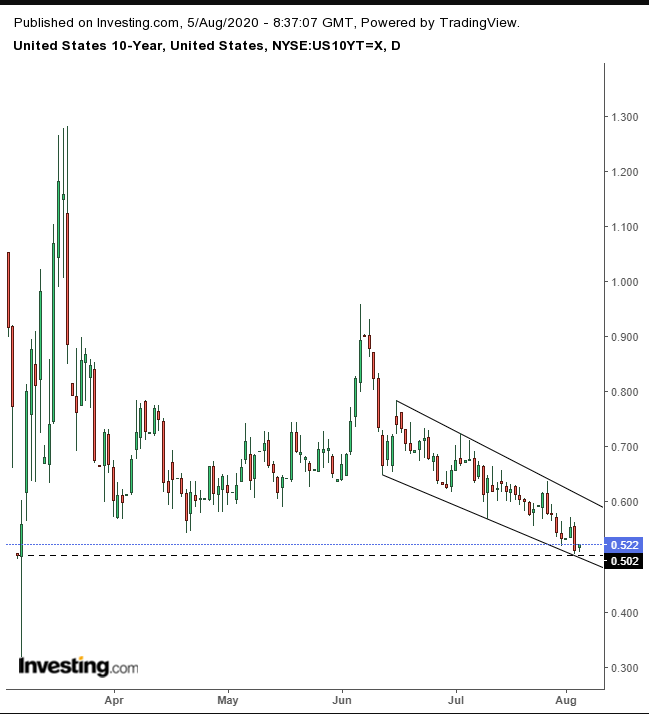 Though rates rose noncommittally, they remained within a falling channel, still just two basis points above the March 8 record low.

The dollar rebounded slightly and moved into positive territory. 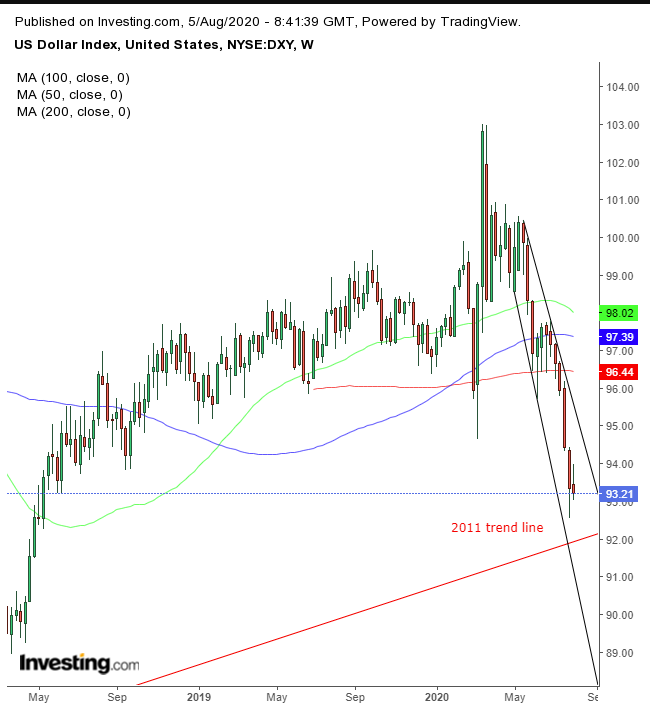 Two trends collided as the USD moved higher: the downtrend since this year's March high and the uptrend since the March 2008 bottom. In the above chart, note the steeper uptrend line since 2011, when that trend spiked higher.

Gold hung on to its massive advance after yesterday pushing comfortably past the $2,000 benchmark, for the first time. Traders who waited patiently for months for this much-anticipated move—which includes us—may have been handsomely rewarded. 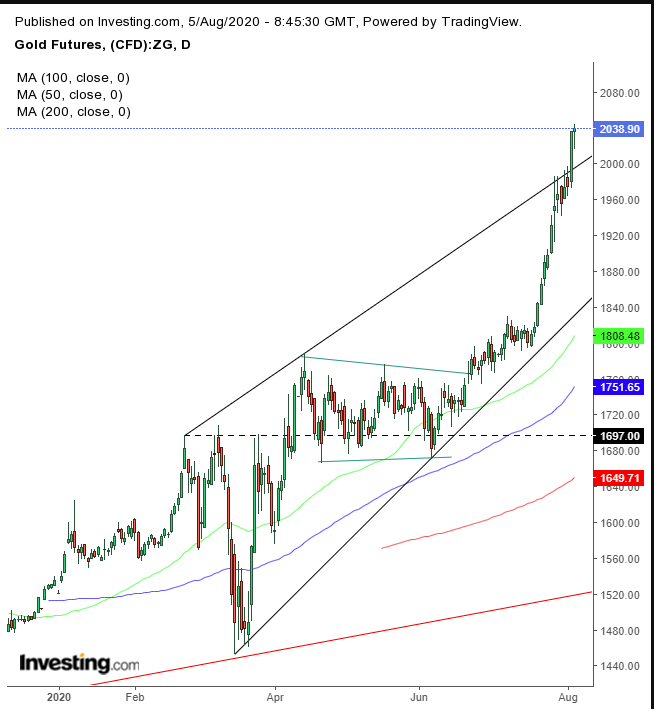 Technically, the top of the rising channel—a previous line demarcating where sellers overcame buyers—is expected to flip to a support, as market dynamics reverse.

Still, that other precious metal, silver, however, provides considerable more value and much less risk, at this point.

Oil jumped 1.8%, extending a rally to the fourth day, after a massive blast at Lebanon’s main port rocked Beirut, raised concerns about fresh instability in the Middle East. 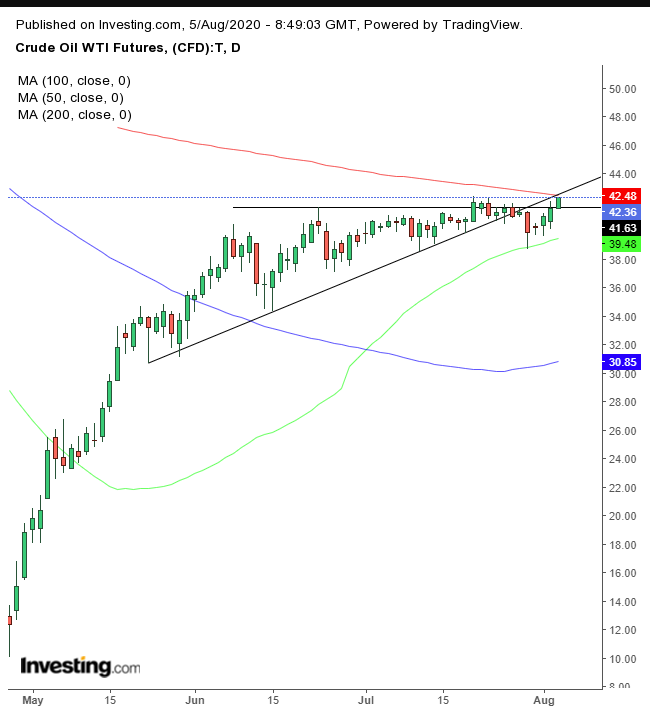 Technically, the price of WTI found a dual resistance: the broken uptrend line and the 200 DMA. For now, the commodity remains at the highest level since March 6, one session before the mind-boggling falling gap that wiped out a quarter of its value, now a presumed support.