US futures for the Dow, S&P 500, NASDAQ and Russell 2000 edged higher on Thursday, while European shares were flat. Regional indices and US contracts all fluctuated this morning as earnings haven't shown a clear path to recovery amid ongoing COVID-19 spikes.

Contracts on the S&P 500 index were slightly higher today, after a three-hour advance. 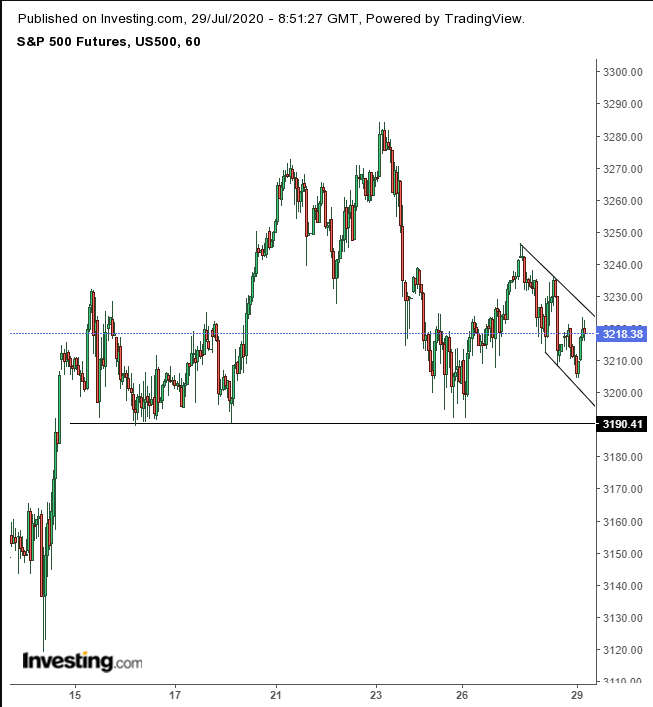 However, the ES erased the previous hour’s gains as of 4:15 EDT, having found resistance by the top of an hourly falling channel, setting up to be the right shoulder of an hourly S&P top.

The Stoxx Europe 600 Index recouped losses made at the open, and has reversed higher at time of writing. Shares of UK lender Barclays (LON:BARC) dropped after the lender said it had set aside more funds than estimated to absorb losses from bad loans amid the pandemic.

Earlier, a mixed Asian session also didn’t provide any clarity on investor sentiment, after yesterday’s losses on Wall Street. Reports of dismal corporate earnings reports added to the pessimism. Japan’s Nikkei 225 slumped (-1.2%) after Fitch downgraded its outlook for the country to “negative” from “stable.”

China’s Shanghai Composite soared (+2.1%), its biggest jump in over a week, fueled by buying after a dip.

An even worse decline was offset by Pfizer's (NYSE:PFE) better than expected outlook, after Monday's announcement its collaboration with German biotech BioNTech (NASDAQ:BNTX) to develop a vaccine for COVID-19 had just started a late-stage human trial. And shares of Eastman Kodak (NYSE:KODK) soared on news the former photography giant had secured a US government loan to speed up domestic drug production.

On Tuesday, the Fed extended most of its emergency lending programs by three months, due to the pandemic's worse-than-expected impact on the US economy. Investors whether to view that move as good or bad news.

Meanwhile, a drop in consumer confidence may have already bolstered the case that the miraculous V-shaped recovery might be nothing more than an economic dead-cat bounce. At the same time, several states interrupted reopening plans, fearing they would increase contagion levels.

Yields, including for the 10-year Treasury, resumed a downward spiral, in motion since early July. 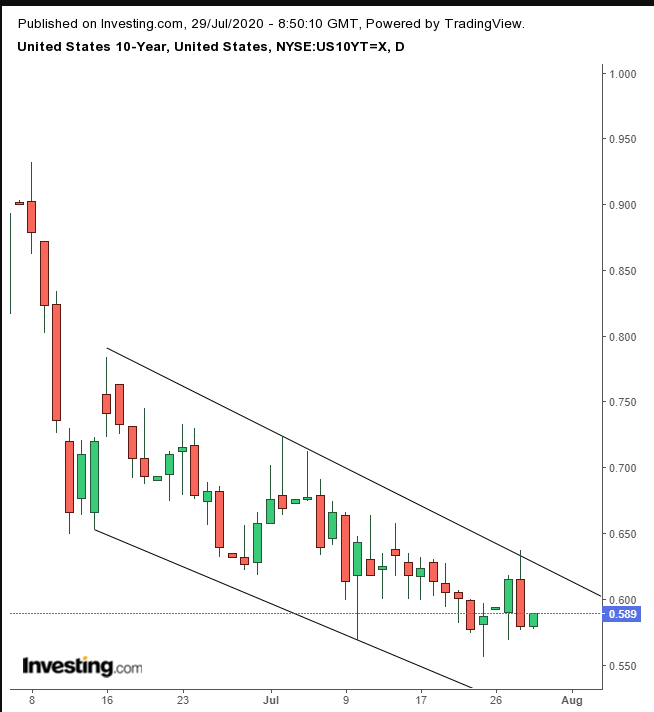 Rates remained within a falling channel, heading toward record lows. 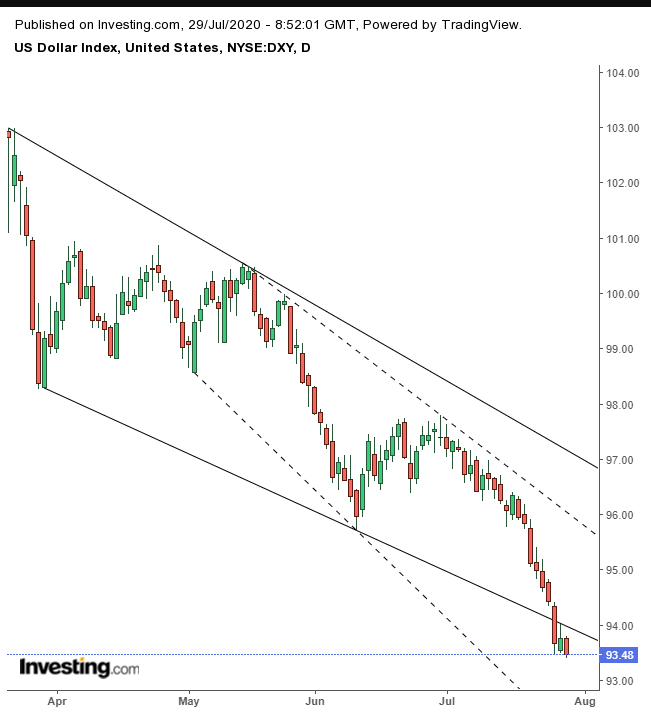 The greenback found resistance by the bottom of its broken falling channel, suggesting a sharper rate of descent, indicated by the dotted parallel lines. For now, the upcoming moves of the global reserve currency are in the hands of the Fed.

Gold climbed for a ninth session, its longest ascent since 2011. 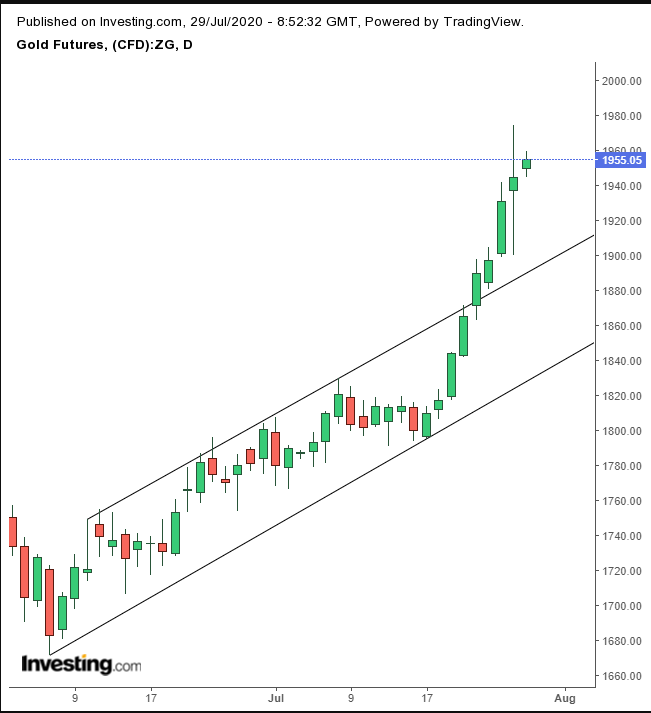 Still, beware of a profit-taking pullback after yesterday’s high wave candle. That denotes bewildered uncertainty and an extremely overbought condition. 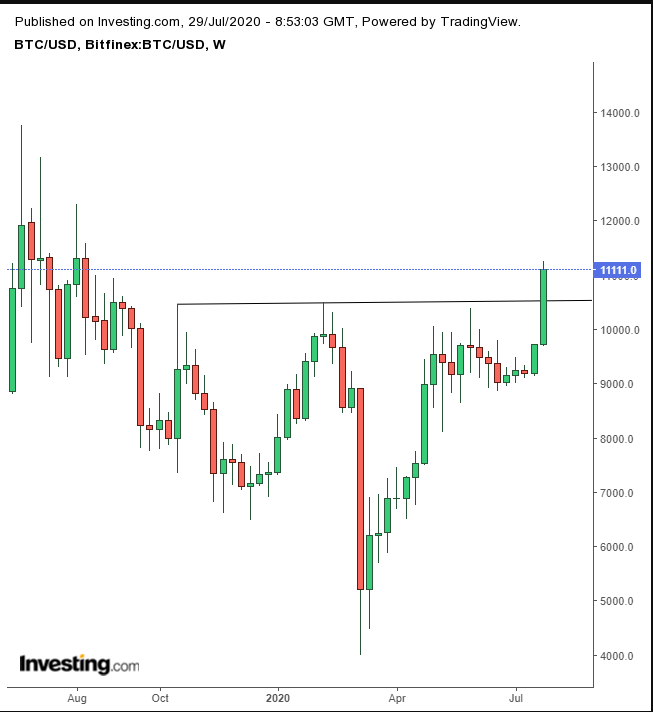 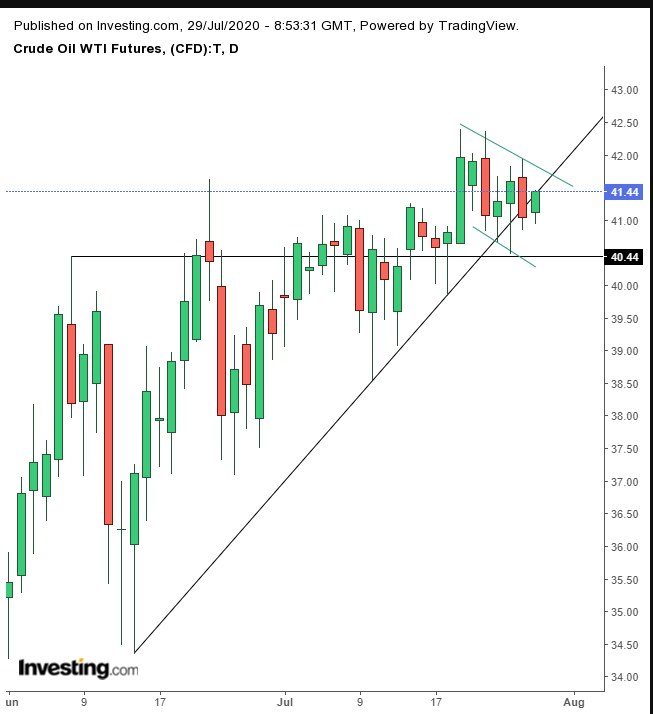