US futures for the Dow Jones, S&P 500, NASDAQ and Russell 2000, along with European stocks, all wavered on Tuesday after a mixed Asian session.

This morning, contracts on the major US indices erased early gains, edging lower at time of writing, signaling there may not be a repeat of yesterday’s rally of the underlying benchmarks.

The STOXX Europe 600 Index gained briefly, led by energy and construction companies, before backtracking. Markets await the conclusion of the Fed's July meeting, which ends tomorrow, as well as further information regarding the size of additional jobless benefits from the US Congress, which has become an object of bitter contention between Democrats and Republicans as accelerating COVID-19 cases continue roiling the American and global economies.

At the same time, Monday's announcement that Moderna (NASDAQ:MRNA) has just started the third and final phase of clinical trials for its coronavirus vaccine, with additional candidates about to enter phase three in the coming weeks, offset concerns over the rising pandemic and a return to full lockdowns.

Now may be an appropriate time to remind readers that experts we've quoted in the past have insisted that no vaccine is likely to completely eradicate this mutating virus. As well, even if a one-and-done inoculation were to be found, due to logistics it is probably impossible to get the vaccine to a large portion of the global population.

An additional theme traders seem to have forgotten about—for now at least—is the brewing cold war between the US and China, and the upheaval it could cause, dismantling the global supply chain structure amid the worst pandemic in a hundred years. Of course, both sides have much to lose should the diplomatic tensions escalate, but that didn’t stop participants from engaging in last century's Soviet-US cold war either.

However, South Korea’s KOSPI outperformed, (+1.8%), boosted by Samsung Electronics (KS:005930), which rallied on the growing view that the company would gain from Intel's (NASDAQ:INTC) plan to outsource more manufacturing. South Korean shares attracted net demand, to the tune of $109 billion, the most since Sep 2013.

Treasury yields, including for the 10-year note, were whipsawed. 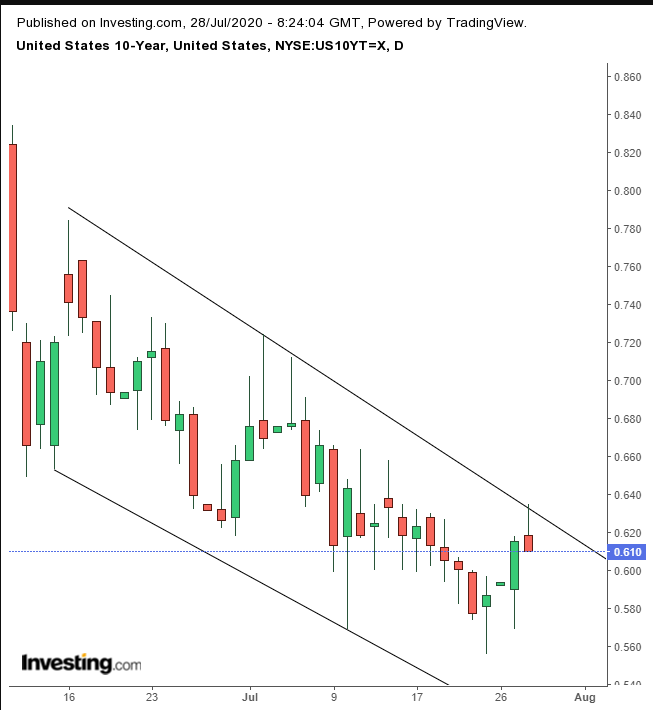 Yields gave up a fourth day of gains, developing a shooting star, as bond bulls were burned when rates touched the falling channel top.

Demand for Treasuries spurred a bounce in the dollar along with yields. 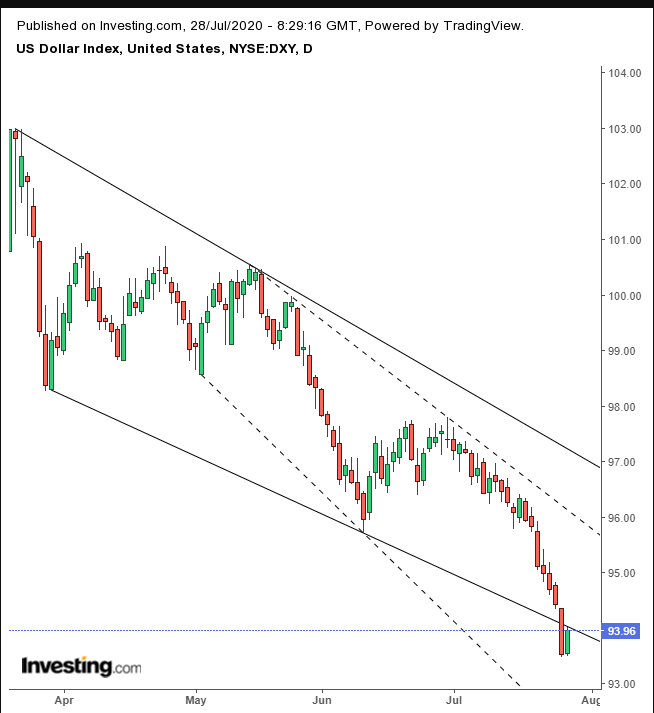 However, the greenback may face its own resistance, the bottom of falling channel, corresponding to the resistance for yield from the same pattern.

The stronger dollar pressured gold, causing it to drop for the first time in eight days after it made a new record high, after its longest winning streak since 2011. 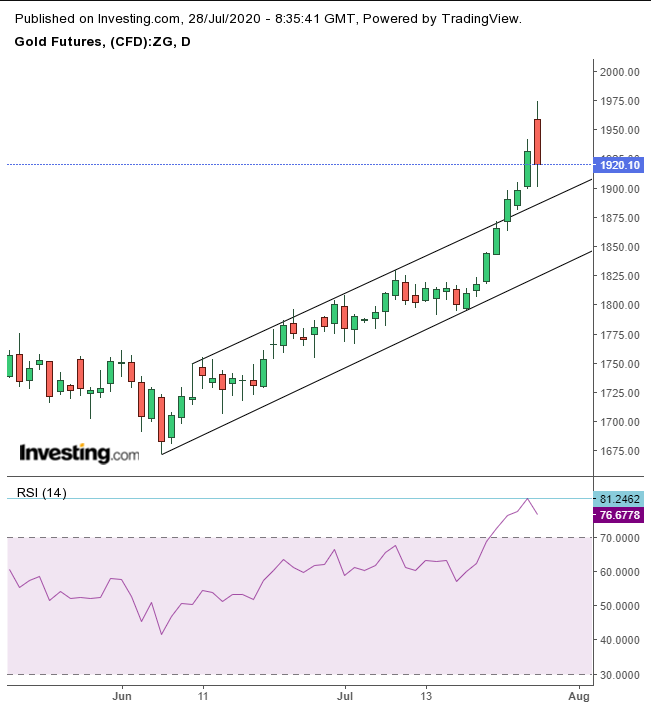 The yellow metal reached the extremely overbought RSI level of 81.29, the highest since June 2014. Nevertheless, we see a support at the $1900 levels, above the rising channel from which it broke free of on Thursday. 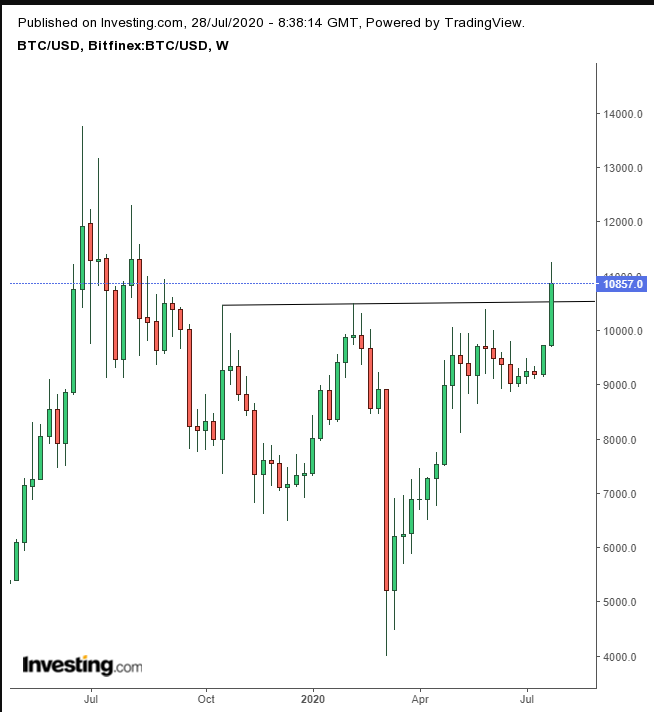 The cryptocurrency retreated below $11,000 after breaking above that level for the first time in nearly a year. The move completed a bottom for the digital currency.

Oil shifted slightly lower, trading at the midway point to $42 per barrel. This makes it the 13th consecutive day WTI remains above $40 a barrel. 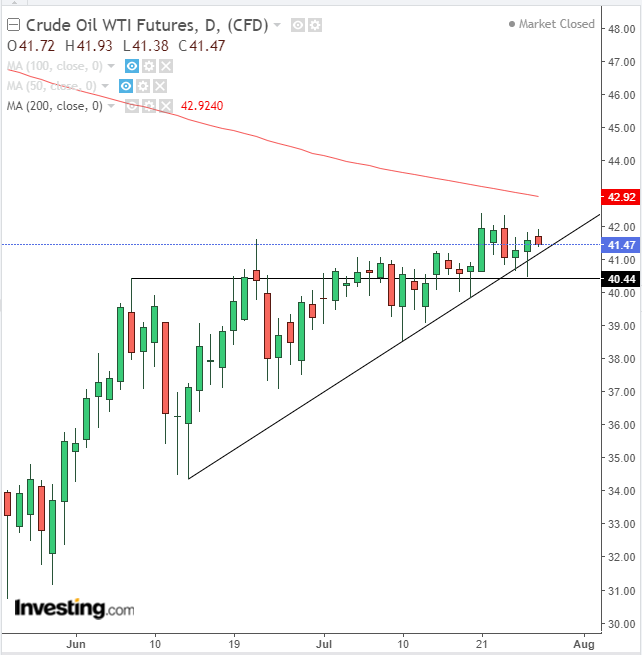 The commodity must break free of the 200 DMA to gain traders’ confidence, after completing an ascending triangle.