Johnson & Johnson's (NYSE:JNJ) announcement yesterday that it was pausing its trial on a COVID-19 vaccine sent US futures, including for the Dow, S&P, and Russell 2000, as well as European shares into the red on Tuesday. However, NASDAQ futures bucked the trend ahead of Apple's expected announcement of a 5G enabled iPhone after the US markets open later today.

The dollar jumped with yields, weighing on gold. Oil recovered but is caught in the crossfire of conflicting themes.

Contracts on the S&P 500 fell 0.5%, at the time of writing, after the news from JNJ that its trial has been halted because of an unexplained illness in a participant. However, traders may take the view that such speed bumps are par for the course as vaccine trials progress after last month’s similar hiatus by AstraZeneca (NYSE:AZN), which proved temporary.

Stimulus in the US is looking less likely once again after members of the House were told not to expect action this week as the confirmation hearings for the next Supreme Court judge started on Monday. As well, many Senate Republicans had already rejected the newest proposal from President Trump, indicating the plan was exorbitantly costly.

To that effect, the European Stoxx 600 Index, which slumped with coronavirus-sensitive industries including travel and leisure, cut early losses from 0.6% to 0.1%. From a technical perspective, regional stocks are struggling between two trends. 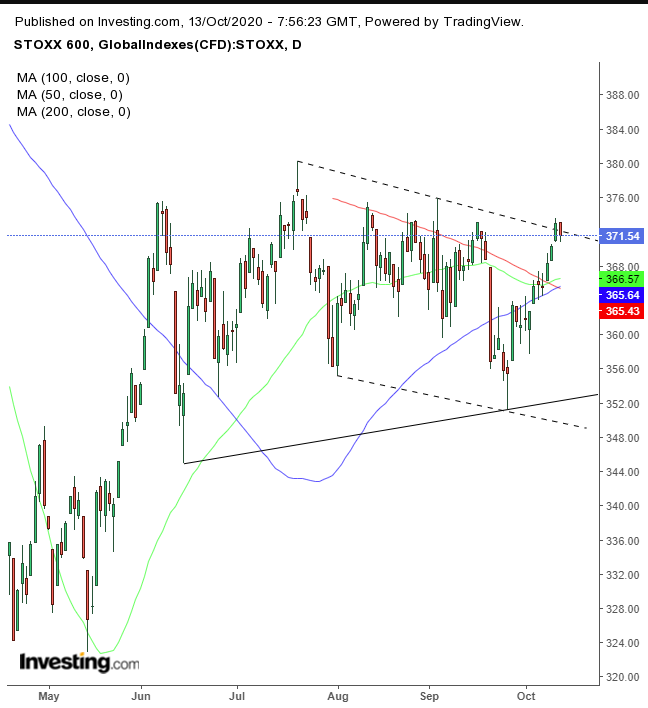 The pan-European benchmark paused in its uptrend from the Sept. 25 low for the first time in four days, having found resistance at the top of a potential reversal pattern. The 50 DMA crossed above the 200 DMA, triggering a Golden Cross, among the most well known technical signals, demonstrating the conflict between the uptrend since the Sept. 25 low and the downtrend since the July 21 peak.

Japan's Nikkei managed to eke out a gain on Tuesday but Hong Kong's Hang Seng and South Korea's KOSPI were down on news of escalating COVID-19 cases and off-again/on-again stimulus concerns. This was despite data from China which showed that the world's second largest economy expanded 9.9% YoY to $249.8 billion. A 13.2% increase in imports helped to push the trade balance down in September.

Today’s customs data revealed that though exports overall were lower than forecast, they climbed 20.5%, to the US, to $44 billion even with higher US tariffs, but also American goods imported rose 24.5% to $13.2 billion.

However, among regional indices it was Australia's ASX that outperformed, up 1% and hitting a two-month high driven by banks and tech, as local traders placed their faith in the any future US stimulus.

Shares in the US extended an advance on Monday, nearing their highest levels in six weeks. The S&P 500 Index climbed for the fourth straight day, and the NASDAQ registered the biggest jump since April, adding as much as 4.1% but retreating a little to close up 3.09%. Technicals suggest that the tech-heavy index will take on its all-time high shortly. 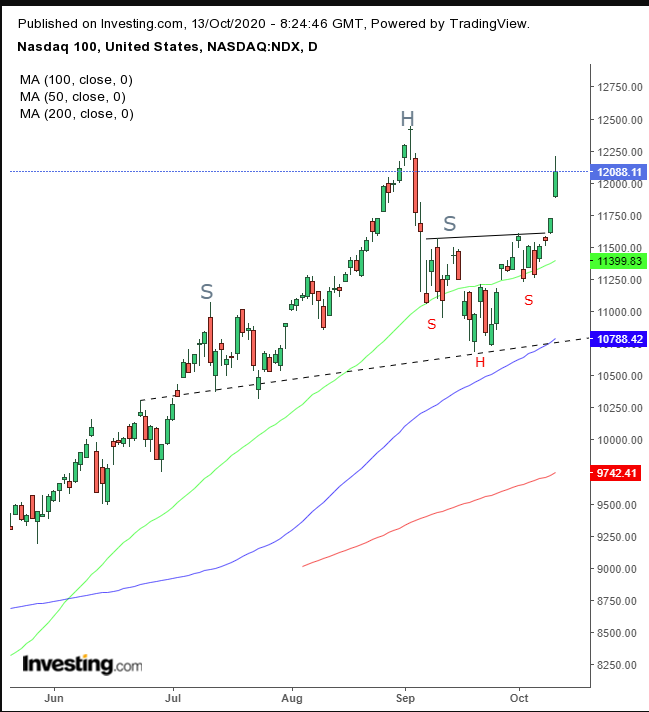 The NASDAQ flipped a H&S top into a smaller H&S bottom.

Amazon (NASDAQ:AMZN) shares surged, on expectations of huge sales numbers during its Prime Day event which starts today and runs for two days.

Apple (NASDAQ:AAPL), which is set to announce the addition of 5G to its new iPhone on Tuesday, saw its share price target increased by RBC Capital Markets to $390 from $345. Twitter (NYSE:TWTR) rallied when Deutsche Bank (NYSE:DB) increased its price target on the stock from $36 to $56.

Yields, including for the 10-year Treasury note, dropped to 0.75, but remained above the 200 DMA, which has been a proven support for the fourth straight day. 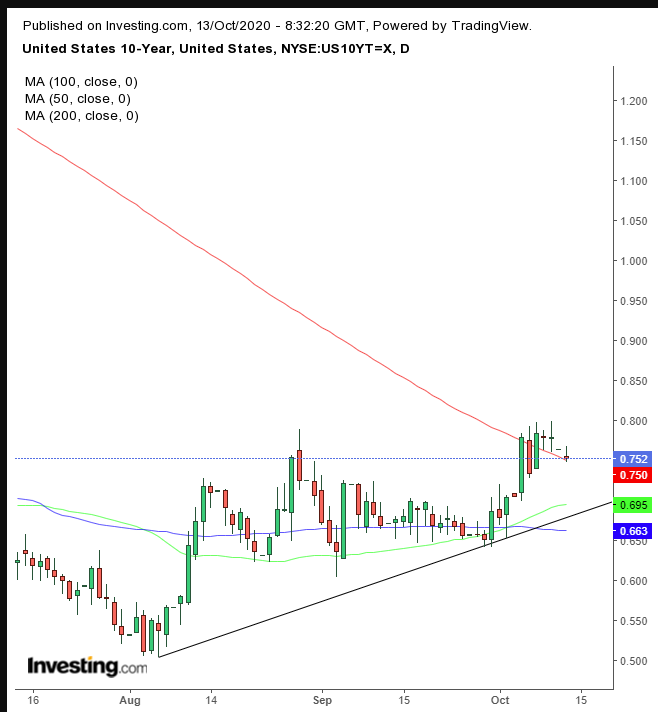 Meanwhile, the 50 DMA, which has been supporting rates since they crossed it on Aug. 12, is climbing toward the 200 DMA, for a potential Golden Cross.

The dollar seemed to find its footing after a four-day selloff. 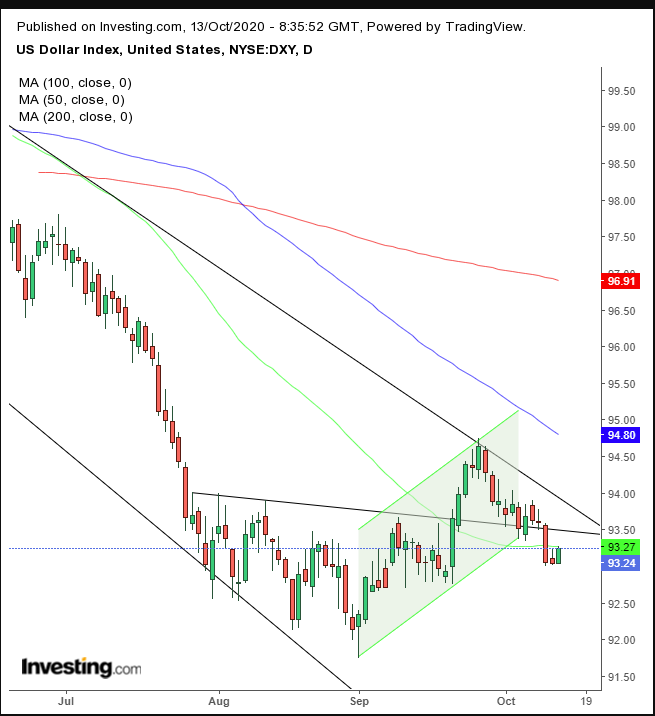 Still, the greenback found resistance at the 50 DMA, after having fallen below the neckline of a would-be bottom. This increases the chances of a resumption of its underlying medium-term downtrend, framed within a falling channel.

Gold was flat, after having rebounded from a 0.7% drop. Perhaps it found support at the bottom of a possible falling wedge, bullish after the medium and long-term uptrend, made particularly so because of the 14% surge within 15 sessions preceding the bullish pattern. 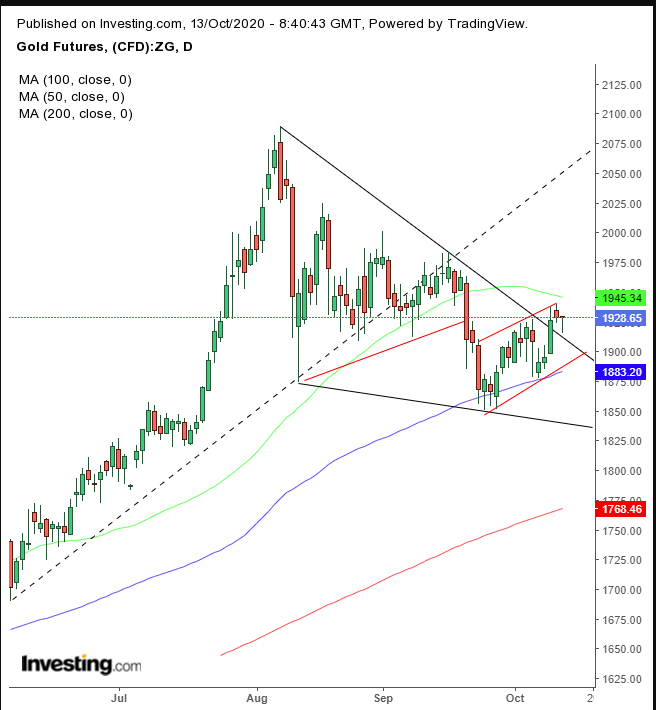 On the other hand, demand has to prove it can absorb all the potential supply represented by the possibly-developing rising flag and preceding bearish symmetrical triangle.

Oil rallied from a slump when workers in the US Gulf headed back to work following Hurricane Delta’s landfall and Libya reopened its biggest field, as China’s crude imports rebounded, ending back-to-back MoM declines. 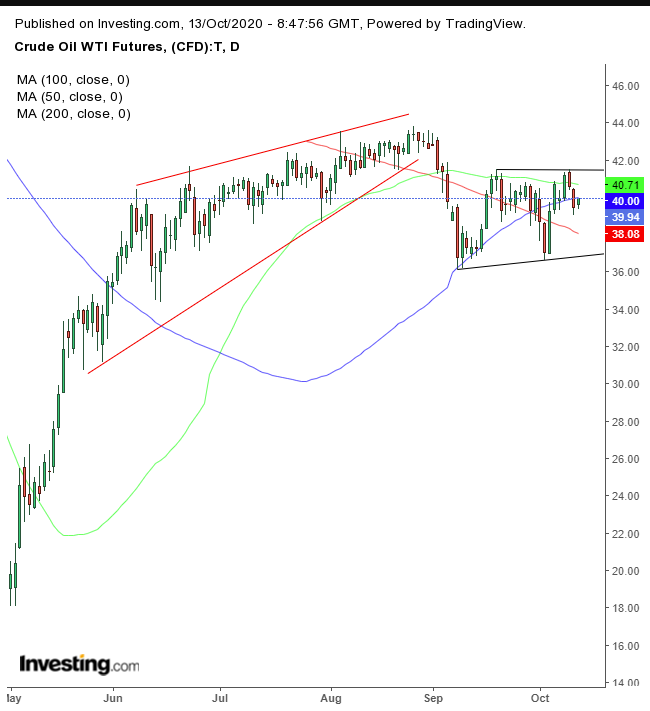 The price of the commodity is trapped within a range, with a bias to a downsized breakout following a bullish rising wedge.