Gold Waits In The Wings As White House, Senators Agree On Record Stimulus

Gold Waits In The Wings As White House, Senators Agree On Record Stimulus

Like a Disney animation, gold suddenly seems to have transformed with the wave of a fairy pixie’s wand and sprinkle of magic dust.

From a safe haven that looked anything but “safe” just weeks ago, the yellow metal is now flavor of the month again for investors looking to exit the dollar trade.

Of course, a closer study of gold will reveal there’s little magic at play here but rather the science of imminent inflation. Tons of cheap money is going to be thrown soon at U.S. markets — money estimated to be growing by the trillions each day and standing at $6 trillion at last count, if White House Economic Adviser Larry Kudlow is to be believed. 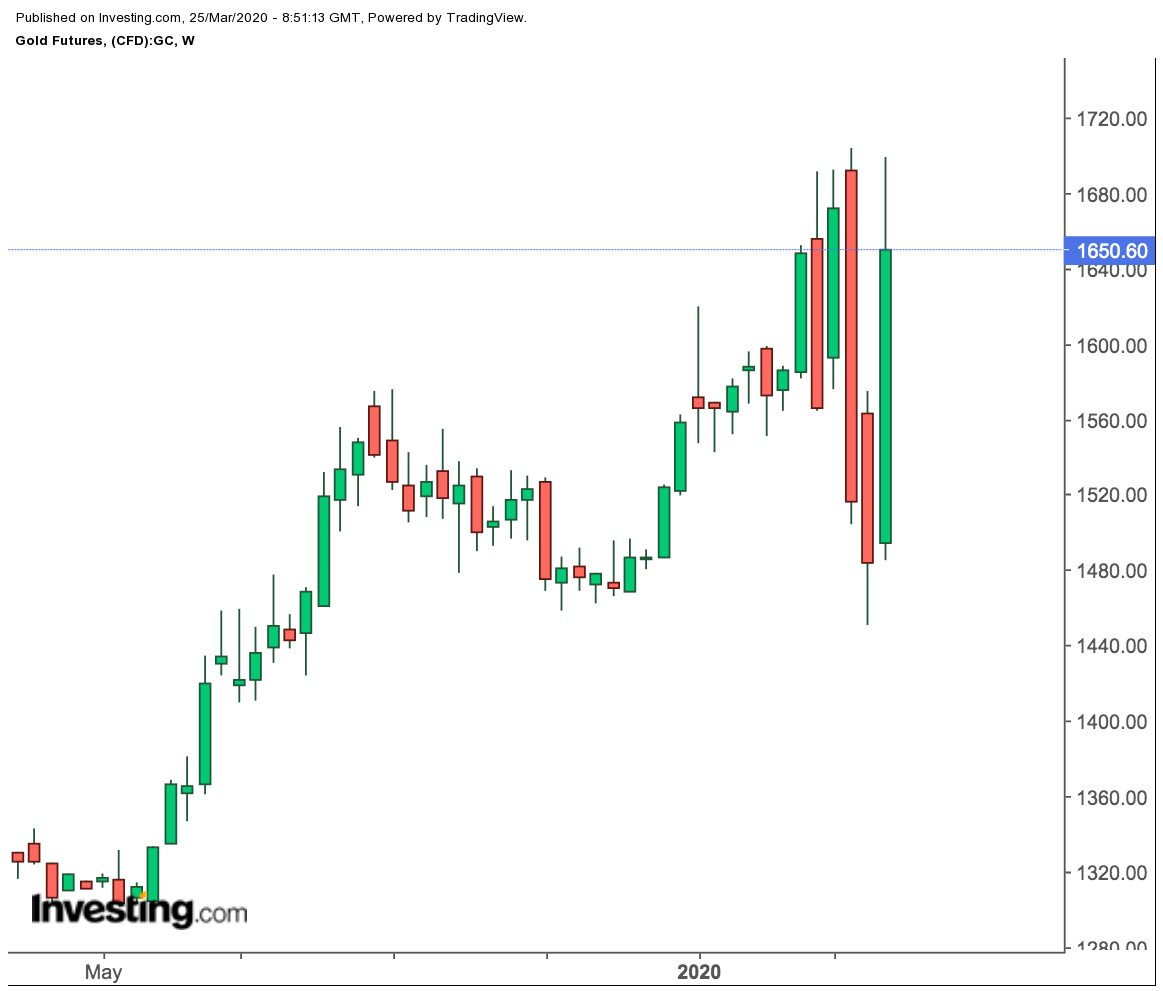 In what would be a trigger to that money, the White House reached a deal early Wednesday with Senate Democrats and Republicans on a record stimulus plan to respond to the economic shock of the coronavirus outbreak. Voting on the plan will come next.

But even ahead of that, gold futures for April delivery on New York’s COMEX reached just 85 cents short of reprising the $1,700 berth it left two weeks ago.

The volatility that whipsawed gold over the past two weeks came from the cash crunch across markets, from equities to credit. Most interestingly, the swoon in gold coincided with the epic 5,000-point loss on the Dow in the two weeks to March 23.

“There’s just so much stimulus money that’s headed for the markets, that this was bound to happen to gold at some point,” Eli Tesfaye, precious metals strategist at RJO Futures in Chicago, told Investing.com on Tuesday.

“The important thing to note is the correction across markets, both on Wall Street and commodities, is on hold for now and that’s stopped gold from being used as piggy-bank to cover losses elsewhere and allowed it to rally on its merit as a safe-haven.”

As Goldman Sachs noted on Tuesday, the recent liquidation in gold was strikingly similar to 2008, when the yellow metal initially failed to act as a safe-haven, falling some 20% from the dollar's strength and a run for cash. The turning point came with the $600 billion quantitative easing announced in November that year by the Federal Reserve.

“We are beginning to see a similar pattern emerge,” the Wall Street firm said, reaffirming its 12-month target of $1,800 for bullion or spot gold. Bullion hasn’t approached that level since 2011, when it went to record highs above $1,900. 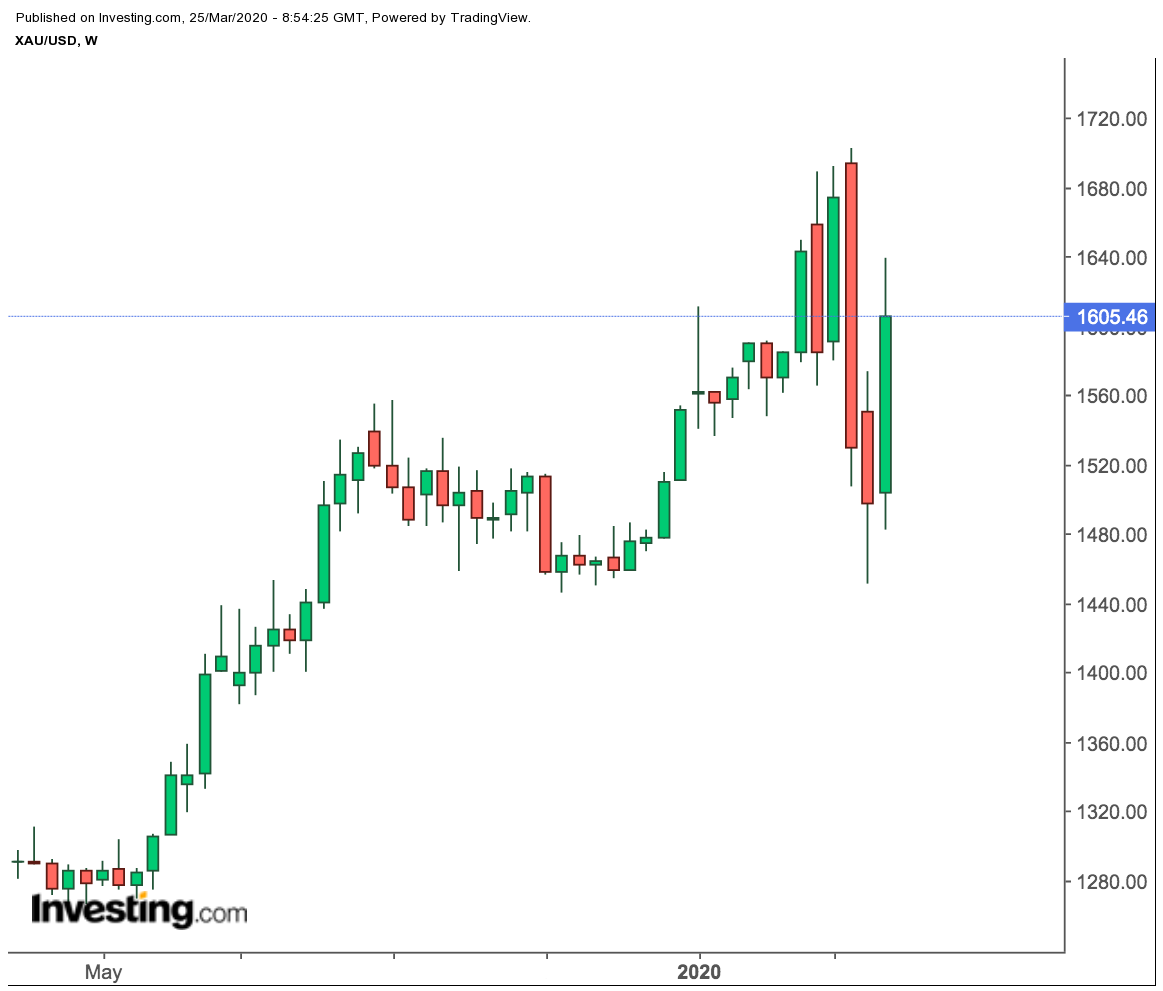 Trump administration economist Kudlow said the QE that would be unleashed this time includes $4 trillion in lending power for the Federal Reserve as well as a $2 trillion aid package currently being hammered out by Congress.

Details of the package agreed by Congress on Wednesday weren’t immediately available. But negotiators said it includes billions in assistance to companies as well as states and cities; checks to most Americans, loans and aid for small businesses to maintain their payrolls, more expansive unemployment insurance, deferrals of taxes and numerous other provisions.

Separately, the Federal Reserve said it will flood markets with unlimited money to buy bonds and conduct overnight repurchase operations in the money market.

“Now that's what you call a bazooka,” TD Securities said in a note. “In this context, expectations for disinflation have finally found a floor, thereby putting a halt in the surge in real rates given interest rates are already at the zero bound.”

It added that hedge funds had halted their selling program in gold and began targeting net length that could give further legs to the rally.

“Gold volatility is going nowhere anytime soon, but it seems the Fed was able to kill its biggest headache, the scramble for cash trade.”