Gold is unlikely to reclaim its safe haven status from the dollar anytime soon as a relentlessly hawkish Federal Reserve and rallying US stocks turn up the throttle on the USD's strength, leaving no place for gold bugs to hide.

The same may be true for Arabica bulls, who enjoyed just a slight reprieve from selling early this week on worries of Brazilian oversupply. Since Monday’s spurt higher, prices of the coffee bean of choice for outlets such as Starbucks (NASDAQ:SBUX) and Dunkin' Donuts (NASDAQ:DNKN) have fallen back and may remain down as the mighty dollar weighs on demand across commodities, said traders.

Conversely, oil could have its downside limited if weekly US inventories fall for a second straight week. Industry data on Tuesday suggested a US crude build for the week ended July 13. But if official stockpile numbers, due at 10:30 a.m. ET on Wednesday, show a decline, then prices could climb from 3-1/2-year lows. The US's West Texas Intermediate (WTI) crude benchmark traded near $67 a barrel this week and the UK global oil gauge Brent traded under $72, pressured by a host of bearish fundamentals, including an apparent Trump Administration reversal on sanction conditions for Iranian oil. Some are betting on a crude price rebound by next quarter, with Goldman Sachs seeing Brent at $80 levels by fall.

In gold, the front-month August futures contract on the New York Mercantile Exchange’s COMEX division hit a one-year low of $1,226.90 an ounce on Tuesday after US. Federal Reserve Chairman Jay Powell said in his semi-annual testimony to Congress that with the job market having strengthened and inflation meeting a 2% target, the "best way forward" was to continue raising rates.

Traders and investors widely expect the Fed to raise rates twice more this year. That has sent a horde of speculators into the dollar, the safe haven of choice lately for investors, displacing bullion’s long-time seat there.

“The dollar has been strong not just because of interest rates but also because of international investors using the US stock market as a hedge to offset losses elsewhere.” George Gero, managing director at RBC Wealth Management in New York, told Investing.com. “Asset allocators are focused only on markets that are performing and gold isn’t one of them,” added Gero, a veteran commentator on precious metals.

After a volatile two quarters, US stocks are back to around record highs struck in January, with the tech-heavy NASDAQ setting all-time peaks Tuesday. The US dollar index, measured against a trade-weighted basket of six major currencies, hit a five-week high in the previous session. 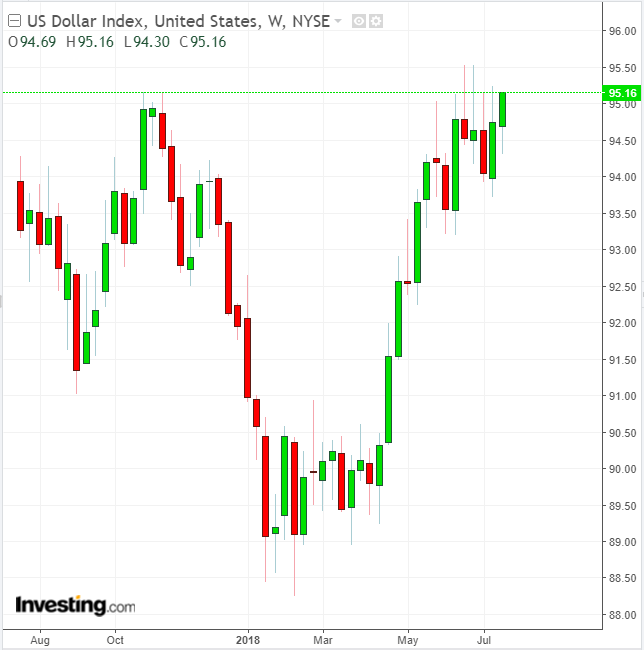 Some gold bulls are counting on the worsening US-China trade war and its potential trouble for American industry to hurt the dollar and slow the Fed’s rate hike spree. But the greenback has barely yielded any gains so far on the tariff spat between Washington and Beijing. Wall Street Journal columnist Justin Lahart said on Tuesday the impact of tariffs and trade restrictions on the economy were hard to model and unlikely to alter the Fed’s plans. “While tariffs could slow the economy, they could push inflation higher … even a temporary pickup in inflation could complicate the Fed’s response,” Lahart wrote.

RBC’s Gero concurs with the growing pessimism. “The heavy open interest in gold options as well as futures amid falling prices indicates that the market prefers the downside for now.”

In other precious metals, silver entered one-year lows as well this week, while platinum struck a two-week trough and palladium hit an April bottom. 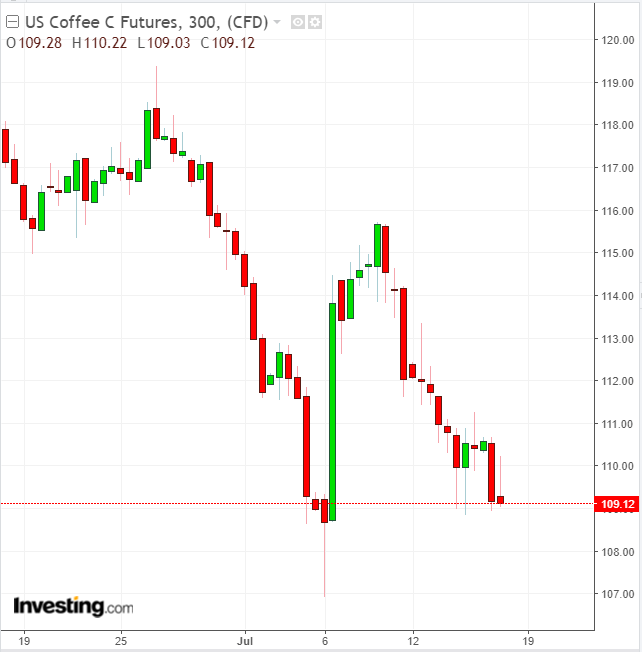 Arabica prices are down more than 10% for the year on fears of a bumper Brazilian harvest. Some investors, however, are positive on the market, citing Brazilian coffee exporting group Cecafé’s latest data showing a 10 percent drop instead to 26.16 million bags for June’s end-season Arabica shipments. Even so, speculators as a whole increased their bearish stance in Arabica coffee to the biggest on record in the week to July 10, official US data showed, after Friday’s market settlement.

For now, though, the strong dollar appears to wield a bigger stick over coffee, said some traders. “Possibility is that if lows from Friday will keep … we would go up from current levels,” commented Peter Hudec, trader and a regular participant on the coffee forum at Investing.com. “But currency impact will also tell.”