In this last full trading week of 2019, the U.S. dollar pulled back against all of the major currencies. It has actually been a rough month for the greenback, but the declines come after a strong November. In general, 2019 has been a good year for the dollar but it peaked at the end of September with losses accelerating in December. The New Zealand and Australian dollars performed particularly well this month, enjoying the strongest gains as both currencies hit 4-month highs. The Reserve Bank of Australia has been one of the most accommodative central banks but after 3 rounds of easing including a cut in October, the Australian dollar finally bottomed. The weakest currency this month was the greenback, which fell victim to softer data and renewed caution from Federal Reserve Chairman Jerome Powell. However next to the dollar, the Japanese yen was also a poor performer, ending the month unchanged, which is surprising because USD/JPY typically has a strong correlation with U.S. stocks and risk appetite. The fact that the Dow Jones Industrial Average ended this week at a fresh record high and yet USD/JPY barely budged is either a red flag for U.S. equities or a precursor for USD/JPY strength and we think it’s stocks that will lose momentum.

Christmas week is typically a quiet, range-bound week in the forex market but this hasn’t been completely true for 2019. Euro broke out strongly on Friday on little news. This was a pure technical break higher after a series of higher lows and higher highs. Broad-based U.S. dollar weakness also helped the pair but the comparatively stronger move can be attributed completely to technicals and risk appetite.

Looking ahead, New Years week is typically a more eventful one for currencies. As shown in the table below, in most years, the trading ranges for EUR/USD and USD/JPY expand. You may even recall the flash crash on January 3, 2019 that took USD/JPY from 108.90 to 104.80 in a matter of minutes. Like the rally in EUR/USD on Friday, there was no specific catalyst outside of beginning-of-the-year position adjustments. Data wise, there’s not much on the calendar to trigger a big move but surprising strength or weakness in Chinese PMIs, U.S. ISM or German labor data could do the trick in a week of low liquidity. Investors are still in holiday mode in the front of the week and it won’t be until after the New Year on Thursday that liquidity starts to normalize. 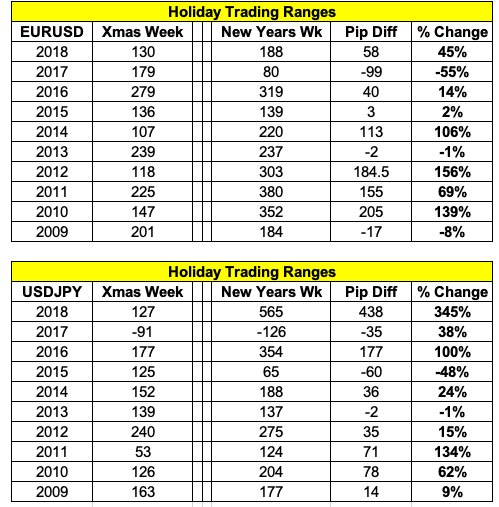 All high-beta currencies like AUD, NZD and CAD are vulnerable to profit taking. Euro could pull back as well but will most likely hold above the 200-day SMA near 1.1150. We are looking for a bottom in USD/CAD and a stronger rally for sterling. Consumer confidence, ISM and the FOMC minutes are scheduled for release next week. While confidence may be bolstered by the overall strength of U.S. stocks, regional manufacturing activity has been weak, pointing to a drop in the ISM manufacturing index. The last time the Fed met, Jay Powell made it clear that rate hikes are not on the horizon. The central bank lowered their inflation forecasts while the dot plot shifted downward with most policymakers seeing no changes in rates next year. Powell in particular wants to see a move in inflation that is significant and persistent before raising interest rates.