Commodity majors oil and gold likely frayed some investors’ nerves this week with wild price swings over anxieties on fuel demand in the pandemic-era and whether there will be political will for a COVID-19 stimulus before the U.S. election.

Those wanting calmer but solid directional action could have found it in another corner of the resources space: corn.

As export sales of U.S. corn continued to break out in an unusually-charged demand period for October, the staple for ethanol, animal feed, corn syrup and even plastics was on track to finish up for a fourth straight week.

Corn has gained 4% in three of the past four weeks, giving it a 32% leap in that period. On a monthly basis, it is due to finish October up 9%, after a similar performance in September and a 10% run-up in August. 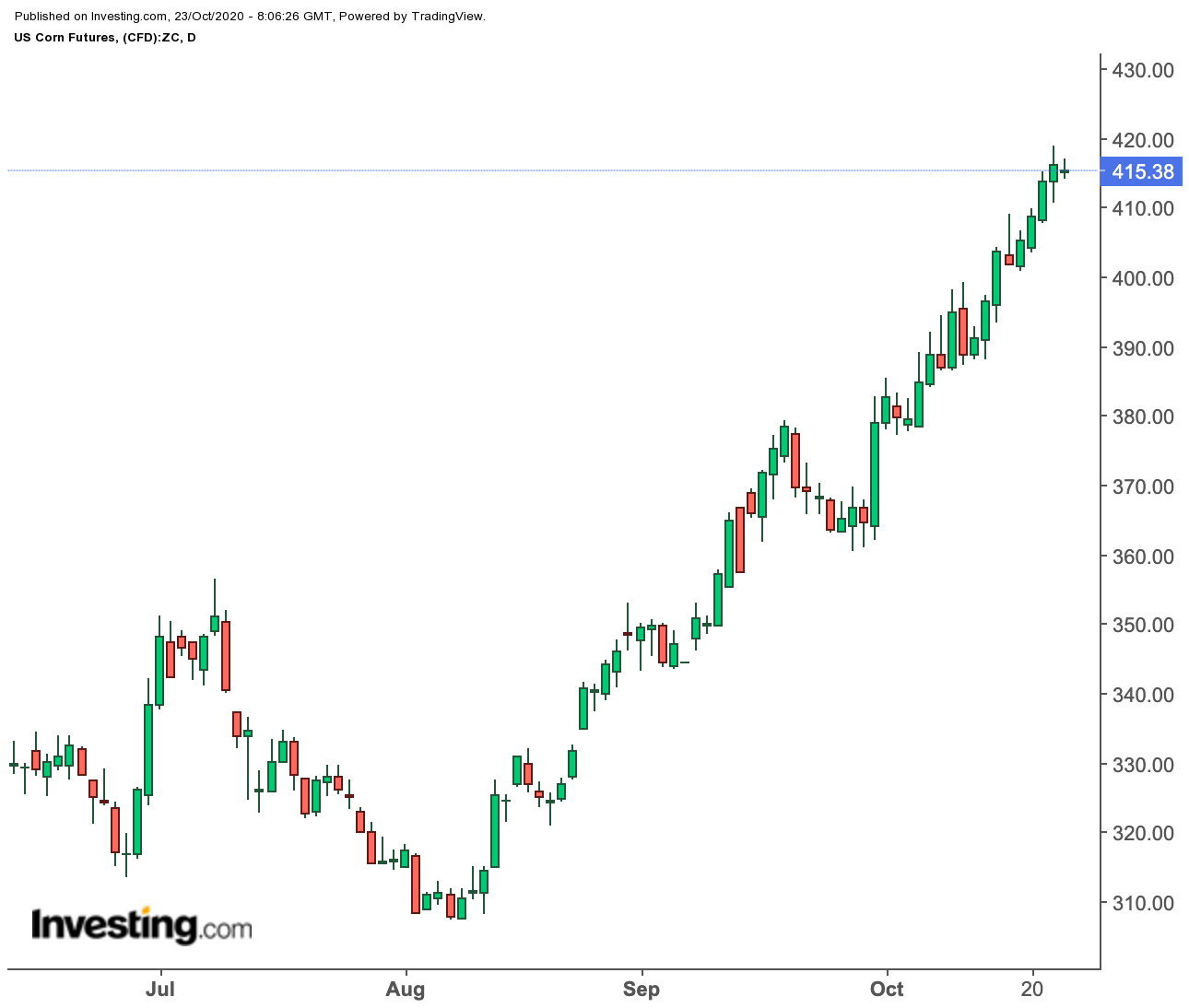 “Another week of good export sales for corn and beans. Like the spoiled child who always gets what they want, has the trade now come to expect, rather than celebrate these numbers. If that is the case, we may be headed for an unpleasant reaction.”

Front-month corn on the Chicago Board of Trade was at nearly $4.16 per bushel in Friday’s early trade in Asia, up from its July settlement of $3.16.

The Hueber Report noted that “bulls show no signs of surrendering the throne as of yet” in corn, and that “there are no warning signs that a revolution could be in the making.”

But it also cautioned that price indicators looked “extremely overbought” on both a daily and weekly basis, and suggested a correction was due, at least for the rally to continue healthily.

Investing.com’s Daily Technical Indicator itself has a “Strong Buy” on CBOT corn, projecting an upside of $4.28 before it breaks.

“We sit squarely within a number of cycle counts and have now reached the next retracement target at 4.14 ½. Still, the palace guards have held fast. Remain patient for now, but I would not be surprised to witness a coup unfolding by the beginning next week.”

Jack Scoville, who heads grains research at the Price Futures Group, however, said some in the U.S. Midwest were holding on to their corn crops in the hope of fetching even better prices.

“Farmers are holding corn for later sale despite firm basis and tight carry spreads. Producers are unhappy with the price (as) soybeans are paying much better, so farmers are selling the soybeans and holding the corn.”

Soybeans’ spot contract on the CBOT was at $10.67 per barrel in early Friday trade. Soybeans’ weekly gains have been more erratic than corn’s, rising less than 7% over the past four weeks, though it has booked five straight months of appreciation that have it a 27% premium since the end of May.

Scoville said harvest suggested that another good corn crop was on the way.

“Demand is holding strong for exports, although domestic demand was cut back from previous estimates. The demand has come primarily from China as the state companies bought for the reserve, and the buying could continue.”

He said harvest of the current Midwest crop was active with good conditions.

Disclaimer: Barani Krishnan does not have a position in the commodities or securities he writes about.