Chart Of The Day: Politics, Economics Play Tug-Of-War With EUR

Chart Of The Day: Politics, Economics Play Tug-Of-War With EUR

To an technical analyst, what’s going on right now with the euro is fascinating.

The forces currently driving the common currency are politics and economics. What’s so interesting about this dynamic is that they are pulling the euro in opposite directions. An additional level of irony: both forces originate from the same country—Germany.

Nearly two months ago, Chancellor Angela Merkel lost 20 percent of her support, after the country's general election at the end of September. That support shifted in favor of the CDU/CSU, the far-right, anti-immigration party. From the election on September 24 through the 7th of November, the single currency fell 3.35 percent versus the dollar. Sustainable economic growth in Germany and the eurozone, topped by a scaling back of accommodation by the ECB caused the euro to rebound around 2.00 percent, paring post-election losses to roughly 1.35 percent.

The news of the collapse of Merkel's efforts to build a coalition over a dispute on migration policy (which is the platform on which the German far-right wing party climbed to second place) just before midnight, sent the euro into a 0.63 free-fall during Asian trading. However, between 2:00 and 4:00 AM EDT the euro rebounded, more than just wiping out the losses of political uncertainty, but actually climbing 0.8 percent higher than before Asian trading sold-off the coalition collapse. This was triggered by positive news out of Germany, in which both German PPI MoM and YoY met estimates, rising 0.3 percent and 2.7 percent, respectively.

Still, both forces continue to struggle for domination of the euro. 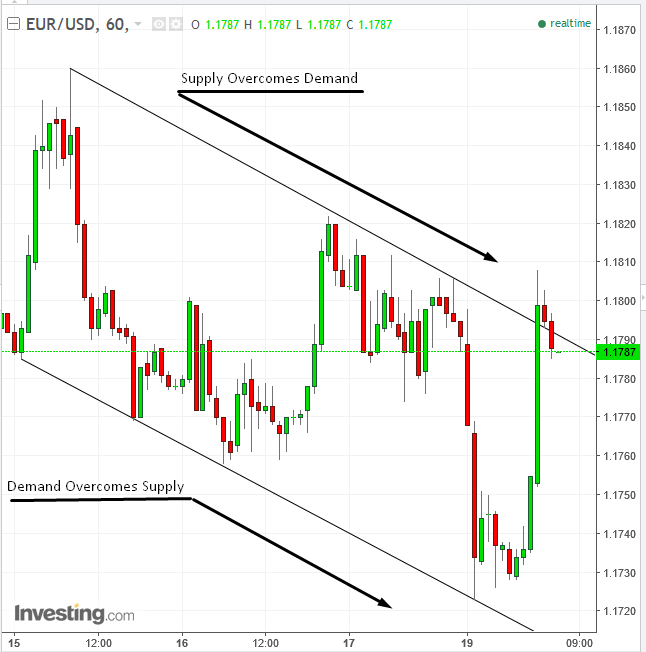 The currency's rebound on the economy’s sustainable growth was cut short when the price reached the top of a falling channel, in which the single currency has been trading since last Wednesday. This channel represents all the known and unknown reasons that motivate investors to sell the euro. The struggle over the channel-top, which marks the angle in which sellers overcome buyers, clearly demonstrates their indecision on the impact of political instability, which may potentially impact the EU during Brexit negotiations and rising tensions in the Middle East.

An upside breakout, with a close above 1.1810 would suggest that economic growth outweighs political uncertainty, while a close beneath 1.1780 may indicate the euro will retest the 1.1730 former trough, before it may resume its retest of the November 7, post-German election low of 1.1554

Conservative traders would wait for a close below 1.1780, a return to retest the channel top and confirmation of its integrity, with a close lower than the price action of the preceding up hour.

Moderate traders would wait for a close beneath 1.1780, and maybe also for a return to the channel-top for a better entry, depending on risk aversion.

Aggressive traders may short now on the close back within the down channel, as well as falling two consecutive hours to boot, as a form of a whipsaw filter.

Conservative traders would wait for a close above 1.1810, then wait for a likely return-move to retest the violated downtrend line and confirm its now-support, with a close higher than the price action of the preceding down hour.

Moderate traders might wait for a close above 1.1810, then wait for a likely return-move for a better entry.

Aggressive traders may go long on a close above 1.1810, with a stop-loss at least beneath the 1.1800 round-psychological price, if not the more cautious stop-loss beneath the down-channel top, likely under 1.1780, depending on the angle at the time.